America: The Story of US - Episode 10: WWII Worksheet & Google Doc 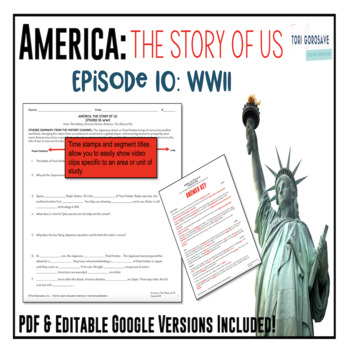 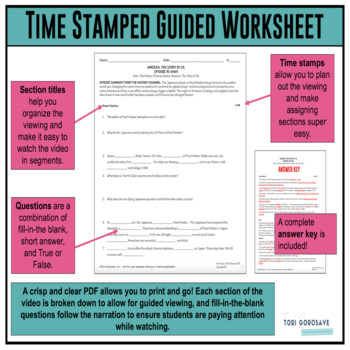 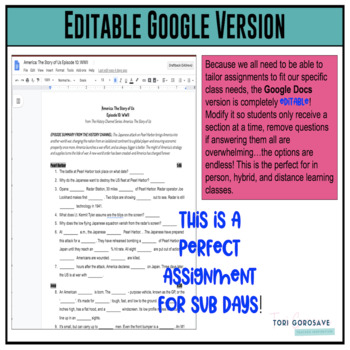 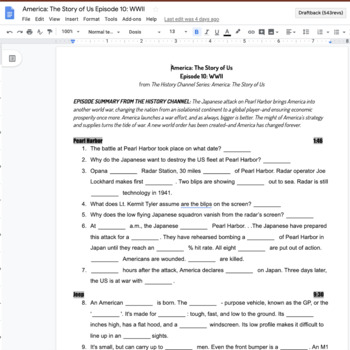 Do you want to show the History Channel's amazing video series, AMERICA: THE STORY OF US, EPISODE 10: WWII, but are afraid your students will become bored or stray off-task? Fear no more! This worksheet will keep students engaged, on-task, and increase their comprehension of the series. While watching the video, students will complete a series of fill-in-the-blank, true or false, and short answer questions. Worksheet sets are available as a PDF or editable Google Doc. All questions follow the video in order. An answer key is included.

EPISODE SUMMARY FROM THE HISTORY CHANNEL:

It is 1939 and while war breaks out in Europe, America remains mired in the Great Depression. The Japanese attack on Pearl Harbor in December of 1941 thrusts the U.S. into the war, changing the nation from an isolationist continent to a global player.

The nation taps into the vast manufacturing reserves that have been idle for ten years: factories, electrical plants, railroads. The war gives jobs to seven million unemployed – many of them women, nicknamed “Rosie the Riveters.” By 1944, the U.S. is producing 40% of the world’s armaments. The might of America’s strategy and supplies turns the tide of war. The U.S. Air Force launches pioneering daylight bombing raids over occupied Europe in B-17 bombers. Under the command of General Dwight Eisenhower, D-Day is an astonishing success.

In 1945, war in the Pacific is brought to a close by the atomic bomb. The enormous consequences of the atomic bomb would be debated for decades. Much of Europe is in tatters, and millions of Jews lost their lives in the Holocaust. As the war ends in 1945, a new world order has been created – and America has changed forever.

Did you know that you can receive credit towards future TpT purchases by reviewing this product? If you enjoy this product, please leave a review at the product page or through “My Purchases” under “My Account” at TpT. Ratings make the TpT world go round. :)

You can also follow me for the latest news on products and sales.

If you have any questions, I’d love to hear from you!

Connect with me at:

***Copyright Disclaimer Under Section 107 of the Copyright Act 1976, allowance is made for "fair use" for purposes such as criticism, commenting, news reporting, teaching, scholarship, and research. Fair use is a use permitted by copyright statute that might otherwise be infringing.***