America The Story of Us (Episode 11 - Super Power) Video Guide 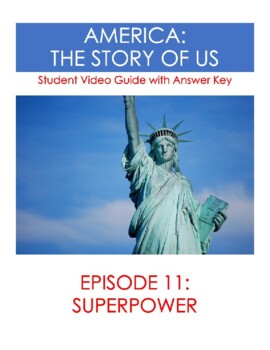 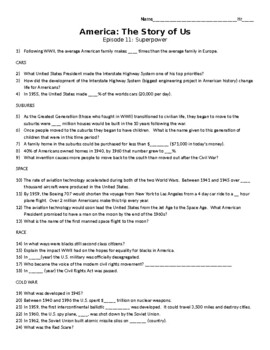 This video study guide, with answer key, follows America The Story of Us - Episode 11 (Super Power). This video was given by the History Channel to all high schools across the nation. Check your schools library.

Summary of the Video: World War II transforms America into a global superpower. Fueled by technology, the economy booms, and a new age of consumerism is born. More than 20,000 cars roll off production lines daily. Interstate highways connect the country, just as the transcontinental railroad had done more than a century before. After defending their country and their ideals, the Greatest Generation comes home. Like the pioneers before them, they transform virgin territory, plowing up more than a million acres of land each year to build new suburbs. This very same trailblazing spirit propels America in the supersonic era as first the Jet Age and then the Space Age dawns. The first man walks on the moon-and plants the American flag there. Optimism for the future prevails. First, though, America must deal with its past, and that means confronting the issue of race. The country becomes enmeshed in a second Civil War of sorts-until, at long last, the Civil Rights Movement brings the words of the Declaration of Independence home to all Americans, both black and white. America is united once again, but a new threat is on the horizon: Communism.

PURCHASE THE ENTIRE SERIES AND SAVE!!!

America The Story of Us - Complete Series - Video Guide