America The Story of Us: WWII (Episode 10) - Video Guide 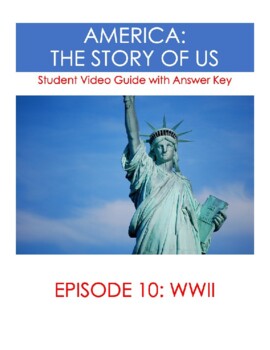 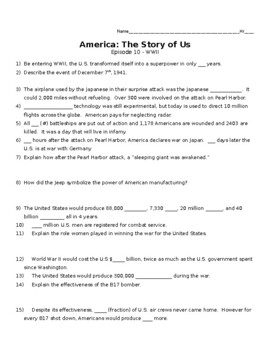 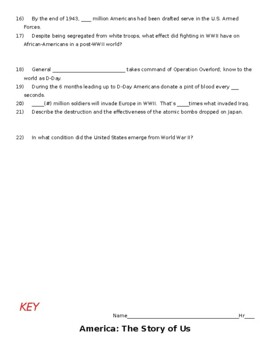 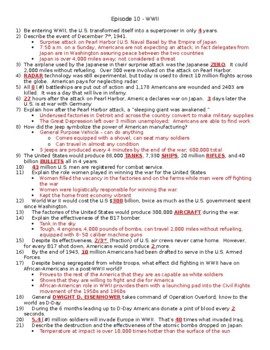 Video study guide for Episode 10: WWII of America The Story of Us. Video guide comes complete with answer key. Questsion follow the film in the same order.

It is 1939, and while war breaks out in Europe, America remains mired in a 10-year Depression. The Japanese attack on Pearl Harbor brings America into another world war, changing the nation from an isolationist continent to a global player--and ensuring economic prosperity once more. America launches a war effort, and as always, bigger is better. The nation taps into vast manufacturing reserves that have been idle for 10 years: factories, electrical plants, railroads. The war gives jobs to 7 million unemployed--half of them women, nicknamed "Rosie the Riveters." By 1944, the U.S. is producing 40 percent of the world's armaments--and has developed the Jeep, radar and the Norden bombsight. The might of America's strategy and supplies turns the tide of war. The U.S. Air Force launches pioneering daylight bombing raids over occupied Europe in B-17 bombers. Under the command of General Dwight Eisenhower, D-Day is an astonishing success. And in 1945, war in the Pacific is brought to a close by the ultimate piece of technology, the atomic bomb. A new world order has been created--and America has changed forever.

PURCHASE THE ENTIRE SERIES AND SAVE!!!

America The Story of Us - Complete Series - Video Guide