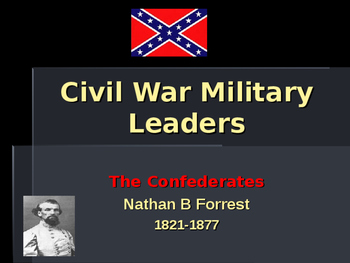 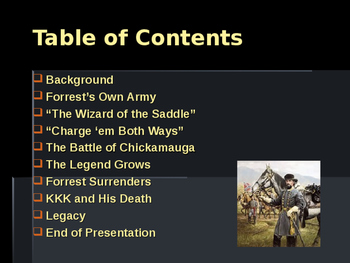 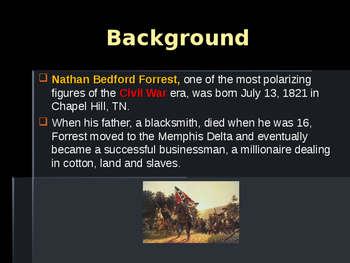 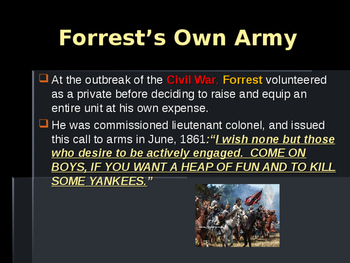 This is a 14 slide, highly animated, power point presentations on the American Civil War - Key Leaders - Confederate - Nathan B Forrest. Each of the presentation slides are editable so you can change it to fit your individual needs.

Nathan Bedford Forrest, one of the most polarizing figures of the Civil War era, was born July 13, 1821 in Chapel Hill, TN. When his father, a blacksmith, died when he was 16, Forrest moved to the Memphis Delta and eventually became a successful businessman, a millionaire dealing in cotton, land and slaves.

In the spring, of April 1864, Forrest and his men were involved in one of the most controversial episodes of the Civil War. After surrounding Fort Pillow, near Memphis, Forrest demanded the surrender of the garrison, which included 262 soldiers of the U.S. Colored Heavy Artillery. When the Union forces refused, Forrest’s men easily overran the fort.

After the war, Forrest is best known as having been a prominent figure in the foundation of the Ku Klux Klan, a group composed of mostly Confederate veterans committed to violent intimidation of blacks, northerners and republicans. He was “Grand Wizard” until he ordered the dissolution of the organization in 1869.

This is one of many power point presentations I offer in my store under the heading.... the American Civil War.
Total Pages
14 slides
Answer Key
N/A
Teaching Duration
N/A
Report this Resource to TpT
Reported resources will be reviewed by our team. Report this resource to let us know if this resource violates TpT’s content guidelines.