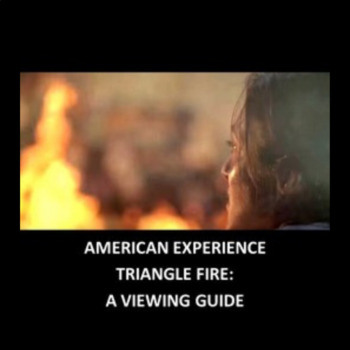 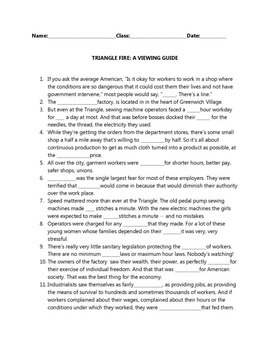 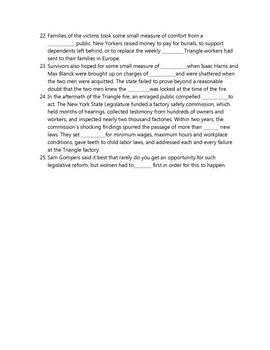 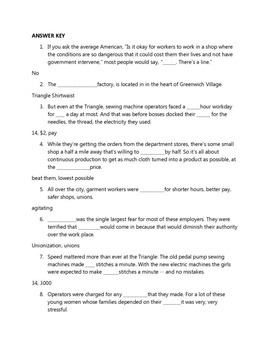 The Triangle Shirtwaist Factory fire on March 25, 1911 was the deadliest workplace fire in New York City's history. The factory, located in New York's Greenwich Village, quickly consumed the congested loft as petrified workers -- mostly young immigrant non women -- desperately tried to make their way downstairs. By the time the fire burned itself out, 146 people were dead. All but 17 of the dead were women and nearly half were teenagers. Issues with the garment industry, unions, and the Women's Suffrage movement are part of this video.

This viewing guide totals 25 fill-in the blank questions with an answer key. It will create detailed notes that will provide historical context for students that is perfect for an American History class or an American Literature class. A teacher can show portions of the documentary, the entire documentary, or assign students to view the documentary as it can be found on the American Experience website or on YouTube.

Log in to see state-specific standards (only available in the US).
CCSSRH.11-12.2
Determine the central ideas or information of a primary or secondary source; provide an accurate summary that makes clear the relationships among the key details and ideas.
CCSSCCRA.SL.2
Integrate and evaluate information presented in diverse media and formats, including visually, quantitatively, and orally.
Total Pages
8 pages
Answer Key
Included
Teaching Duration
2 days
Report this Resource to TpT
Reported resources will be reviewed by our team. Report this resource to let us know if this resource violates TpT’s content guidelines.