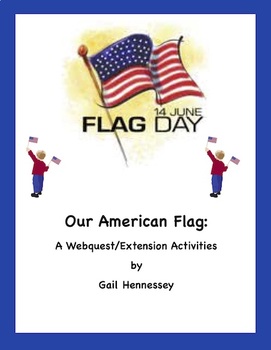 Gail Hennessey
1.4k Followers
Follow
Compatible with Digital Devices
The Teacher-Author has indicated that this resource can be used for device-based learning.
DescriptionReviews8Q&A

Use Our American Flag webquest of 12 informative questions to learn about Flag Day,Fourth of July and flag history. In addition to the webquest there are 7 extension activities.I always try to include a multi-curricular idea such as writing in the content area with my activities. There are also 16 fun facts about the American flag, flags of the world and the Fourth of July.

Use on Flag Day or any day you have an opportunity to discuss the American Flag with your students!

If you would like a student version, just contact me and I would be happy to send it along.

1.Use this informative webquest with your students to learn about the Statue of Liberty, one of the most famous landmarks in the United States.Grades 4 and up.

There are 7 webquestions and several extension activities. Statue of Liberty: A Webquest

3. Learn about the White House with 10 informative web questions, comprehension and discussion questions and several extension activities.White House: A Webquest

President Andrew Johnson had a pet white mouse. President William McKinley had a pet parrot who was trained to whistle, "Yankee Doodle". President James Garfield was the first president to be left- handed AND could write with both hands(and different languages at the same time-Greek and Latin). George H W Bush liked eating pork rinds as a snack. President George Washington was a spelunker, a person that likes searching in caves. John F. Kennedy said, “And so, my fellow Americans, ask not what your country can do for you, ask what you can do for your country.” Use this presidential webquest to learn more about our presidents!