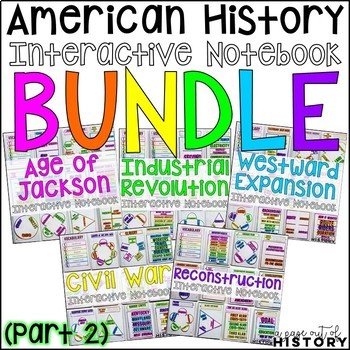 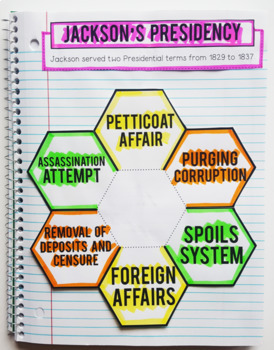 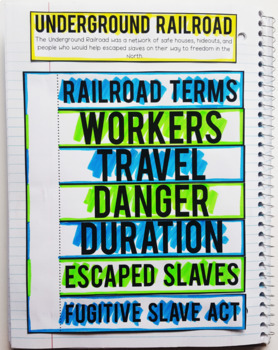 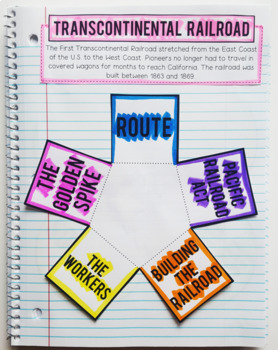 A Page Out of History
3.1k Followers

More fromA Page Out of History

This interactive notebook bundle includes everything you need to teach about American history from the Age of Jackson through Reconstruction (Jackson's Presidency - end of Reconstruction).

The organizers in this resource can be used on their own, or as a supplement to student notes. Interactive notebooks are a great tool to keep students organized and engaged in the lesson!

In this resource you will find...
• 102 graphic organizers with text on them, and others left blank for your own customization
• 5 maps are also included
• 30 pages of thorough suggested answers that you are free to use with these graphic organizers and flippables.
• Previews of each page in action for you or your students to reference.
• A cover page and table of contents for each notebook is also included.

Please view each product for an in-depth look at what is included in this resource!

This bundle is PART 2 of a 4-part series of American History interactive notebooks!

Check out my other interactive notebooks!

Click the ★ on the right to follow my store and be notified of new products and freebies!

If you have any questions, concerns, or comments about the download please email me at apageoutofhistory@gmail.com prior to leaving feedback. I will be more than happy to make any changes or corrections that are needed!

The legal stuff
©2017 A Page Out of History. All rights reserved. Purchase of this lesson/unit entitles the purchaser the right to reproduce the pages in limited quantities for ONE classroom use only. Duplication for more than one classroom such as another teacher, a grade level, school, an entire school system or commercial purposes is strictly forbidden without written permission. Copying any part of this product and placing it on the internet in any form, even a personal/classroom blog or website, is strictly forbidden and is a violation of the Digital Millennium Copyright Act (DMCA).
Total Pages
203 pages
Answer Key
Included
Teaching Duration
N/A
Report this resource to TpT
Reported resources will be reviewed by our team. Report this resource to let us know if this resource violates TpT’s content guidelines.

A Page Out of History