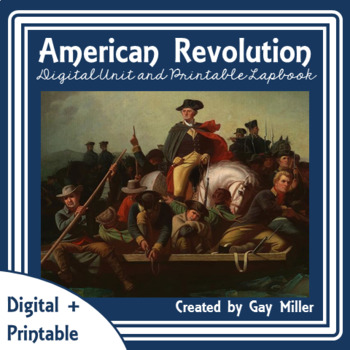 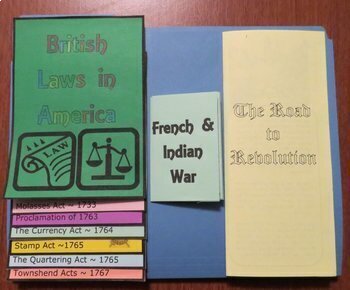 Revolutionary War contains digital resources created with Google Apps and printable interactive organizers which may be glued onto a file folder to form a lapbook, added to interactive notebooks, or used individually.

Lesson 1 – Conflict
Lesson 2 - The King of England tries to Tighten his Control
Lesson 3 – Sons of Liberty
Lesson 4 – The Boston Massacre & The Boston Tea Party
Lesson 5 – The First Continental Congress
Lesson 6 – The Minutemen - Paul Revere & The Battles of Concord and Lexington
Lesson 7 – Bunker Hill
Lesson 8 – Who Would Win the Revolutionary War?
Lesson 9 – The Second Continental Congress & the Hessian
Lesson 10 – Common Sense and the Declaration of Independence
Lesson 11 – Famous People
Lesson 12 - The American Flag
Lesson 13 – Early Battles
Lesson 14 – Washington Crosses the Delaware & The Battle of Saratoga
Lesson 15 – Valley Forge and the End of the War

Timeline
Maps
Paintings to Use for Discussion and Writing Prompts

Printable Organizer Topics include the following:

This Revolutionary War Lap Book contains interactive organizers which may be glued onto a file folder to from a lap book, added to interactive notebooks, or used individually.

• The Road to Revolution – Pamphlet Fold

• Who Will Win the Revolutionary War? – 2 Door Flap Book

• The Colonies at War - Book

• The Declaration of Independence – Shape Book

• Pictures to Use for Writing Prompts & Discussion

Download the first in this series free to get a look at the quality and format of this product.

Also in this series:

If you have already purchased three lap books from this series, you are in luck. Simply send me an e-mail with your username and the date you purchased the books. I will e-mail you the next book in the series.