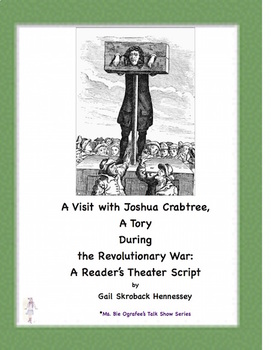 During the Revolutionary War, Tories supported the British in the war. Loyalists, the King’s Friends and Royalists were other names for those that took sides with the British. Students will learn about what it was like to be a Tory during the American Revolutionary War. Joshua Crabtree(fictitious character) is a guest on Ms. Bie Ografee's Talk Show. The format of the Reader's Theater Script is that a studio audience asks questions of Ms. Bie Ografee's guest to learn what it was like to support the British and not the Patriots during the American Revolution.

There are 10 questioners, A Did You Know? section, comprehension questions and a Teacher Page with extension activities and the key.

Ms.Bie Ografee Reader's Theater Scripts are a popular series in my TpT Store. Currently, there are about 25 different titles in history, science and people in literature.

Resources that would work well with this play:

1. Revolutionary Female Spies: American Revolution/ Revolutionary War: Studying the 13 Colonies? This resource would work great for such a unit of study. Part of my Ms. Bie Ografee's Reader's Theater Scripts, this play about the Culper Spy Ring and specifically, Agent 355, one of the female member of the organization! During the Revolutionary War, the Culper Spy Ring was organized to work to defeat the British. Agent 355 and other members of the spy organization were very important in the colonists being victorious in the War for Independence from England. Although Agent 355's real name remains a mystery, she was one of the women spies who showed that patriotism has no gender! Secret codes, invisible ink, LAUNDRY used to communicate messages, what spies did during the Revolutionary war, lots of information is weaved into Agent 355 being a guest on Ms. Bie Ografee's Talk Show

Ografee's Talk Show with the studio audience asking her questions. Also great for an activity during Women's History Month or any time you are looking for a fun/informative play to use with your students! Lots of extension activities, links, a Did You Know Fact section, comprehension questions and the key are also included.

2. Use this Reader's Theater Script to learn about our 3rd President, Thomas Jefferson. Using the format of my Ms. Bie Ografee Talk Show Series, Jefferson is a guest on the show and audience members ask questions of her guest, Thomas Jefferson. In addition to lots of interesting information, there is a Did You Know? section, comprehension questions and a teacher page with extension activities, additional links and the key. The resource can be a one day activity or over several

days if you decide to do some of the activities:Thomas Jefferson, A Reader's Theater Script

3. Part of my Ms. Bie Ografee series of plays, this Reader's Theater Script is on the "Father of the Constitution", James Madson(1751-1836), and his sharing with students the history of the writing of the Constitution. Madison who would become the 4th President of the United States(1809-1817)), played a very important role in the forming of our US Constitution. In addition to being a delegate, he introduced the first additions to the Constitution(amendments) which came to be known as the Bill of Rights. With 13 audience questioners, a Did You Know Section, comprehension questions, a Teacher Page with extension activities, key and additional links, students will learn about the writing of our important government document, the Constitution:

Constitution, A Visit with James Madison, "Father of the Constitution"

Total Pages
11 pages
Answer Key
Included
Teaching Duration
40 minutes
Report this Resource to TpT
Reported resources will be reviewed by our team. Report this resource to let us know if this resource violates TpT’s content guidelines.