Analysis of a scientific article 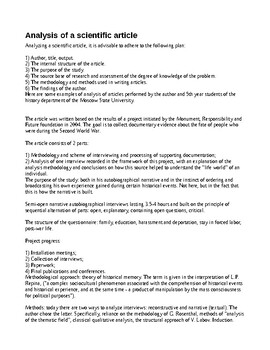 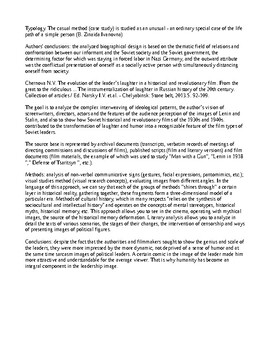 Analyzing a scientific article, it is advisable to adhere to the following plan:

2) The internal structure of the article.

3) The purpose of the study.

4) The source base of research and assessment of the degree of knowledge of the problem.

5) The methodology and methods used in writing articles.

6) The findings of the author.

Here are some examples of analysis of articles performed by the author and 5th year students of the history department of the Moscow State University.

The essay was written based on the results of a project initiated by the Monument, Responsibility and Future foundation in 2004. The goal is to collect documentary evidence about the fate of people who were during the Second World War.

The article consists of 2 parts:

1) Methodology and scheme of interviewing and processing of supporting documentation;

2) Analysis of one interview recorded in the framework of this project, with an explanation of the analysis methodology and conclusions on how this source helped to understand the “life world” of an individual.

The purpose of the study: both in his autobiographical narrative and in the instinct of ordering and broadcasting his own experience gained during certain historical events. Not here, but in the fact that this is how the narrative is built.

The structure of the questionnaire: family, education, harassment and deportation, stay in forced labor, post-war life.

Methodological approach: theory of historical memory. The term is given in the interpretation of L.P. Repina, ("a complex sociocultural phenomenon associated with the comprehension of historical events and historical experience, and at the same time - a product of manipulation by the mass consciousness for political purposes").

Methods: today there are two ways to analyze interviews: reconstructive and narrative (textual). The author chose the latter. Specifically, reliance on the methodology of G. Rosenthal, methods of “analysis of the thematic field”, classical qualitative analysis, the structural approach of V. Labov. Induction. Typology. The casual method (case study) is studied as an unusual - an ordinary special case of the life path of a simple person (B. Zinaida Ivanovna)

Authors' conclusions: the analyzed biographical design is based on the thematic field of relations and confrontation between our informant and the Soviet society and the Soviet government, the determining factor for which was staying in forced labor in Nazi Germany, and the outward attribute was the conflictual presentation of oneself as a socially active person with simultaneously distancing oneself from society.

Chernova N.V. The evolution of the leader’s laughter in a historical and revolutionary film. From the great to the ridiculous ... The instrumentalization of laughter in Russian history of the 20th century. Collection of articles / Ed. Narsky I.V. et al. - Chelyabinsk: Stone belt, 2013.S. 92-109.

The goal is to analyze the complex interweaving of ideological patterns, the author’s vision of screenwriters, directors, actors and the features of the audience perception of the images of Lenin and Stalin, and also to show how Soviet historical and revolutionary films of the 1930s and 1940s. contributed to the transformation of laughter and humor into a recognizable feature of the film types of Soviet leaders.

The source base is represented by archival documents (transcripts, verbatim records of meetings of directing commissions and discussions of films), published scripts (film and literary versions) and film documents (film materials, the example of which was used to study “Man with a Gun”, “Lenin in 1918 ”,“ Defense of Tsaritsyn ”, etc.).

Methods: analysis of non-verbal communicative signs (gestures, facial expressions, pantomimics, etc.); visual studies method (visual research concepts), evaluating images from different angles. In the language of this approach, we can say that each of the groups of methods “shines through” a certain layer in historical reality, gathering together, these fragments form a three-dimensional model of a particular era. Methods of cultural history, which in many respects "relies on the synthesis of sociocultural and intellectual history" and operates on the concepts of mental stereotypes, historical myths, historical memory, etc. This approach allows you to see in the cinema, operating with mythical images, the source of the historical memory deformation. Literary analysis allows you to analyze in detail the texts of various scenarios, the stages of their changes, the intervention of censorship and ways of presenting images of political figures.

Conclusions: despite the fact that the authorities and filmmakers sought to show the genius and scale of the leaders, they were more impressed by the more dynamic, not deprived of a sense of humor and at the same time sarcasm images of political leaders. A certain comic in the image of the leader made him more attractive and understandable for the average viewer. That is why humanity has become an integral component in the leadership image.