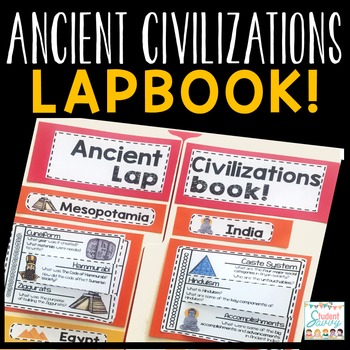 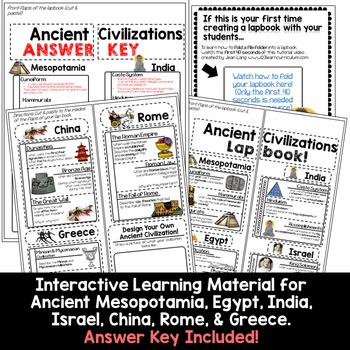 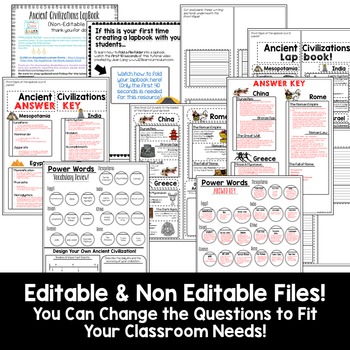 In this resource, students will design an informational lap book about Ancient Mesopotamia, Egypt, India, Israel, China, Rome, and Greece. It includes cut & paste pages and flaps that will test student knowledge on their Ancient Civilization curriculum.

This product is Editable! You can change or edit the questions to fit the needs of your students.

If this is your first time creating a lap book with your students, there is a short 40 second video that will assist you on how to assemble.

This lapbook project is excellent to have for review before an exam or as an extended learning activity!

Here is a deeper look at each of the Interactive Journal units:


Ancient Rome Unit
Topics covered in this unit include: Etruscan and Greek Influence of Rome, The Roman Republic, Roman Social Hierarchy, Twelve Tables, Law of Nations, Triumvirates, Dictators & Julius Caesar, The Punic Wars (First, Second, Third), Roman Law (and its influence on law today), The Collapse of Roman Republic, The Roman Empire, Roman Architecture & Other Contributions, Gladiators & Entertainment, The Spread of Christianity, The Decline & Fall of Rome (and all the theories why it collapsed)

How to receive credit on TpT to use for future purchases:
• Go to your My Purchases page. Under each purchase you'll see a Provide Feedback button. Simply click it and you will be taken to a page where you can give a quick rating and leave a short comment for the product. I value your feedback greatly as it helps me determine which products are most valuable for your classroom so I can create more for you.

Be the first to know about my new discounts, FREEBIES, and products:
• Look for a green star near the top of any page within my store and click it to become a follower. You will now be able to see FREEBIES and customized emails from my store!