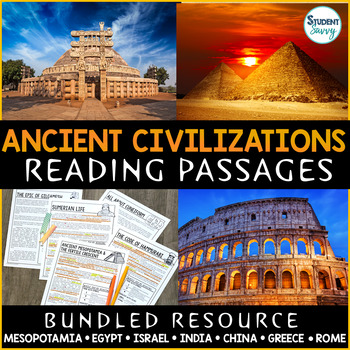 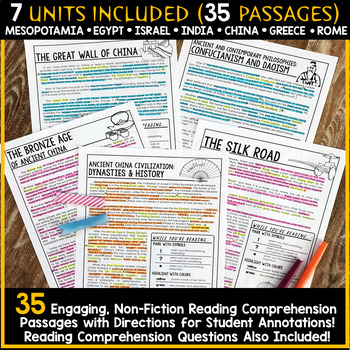 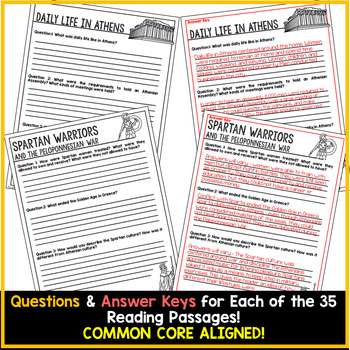 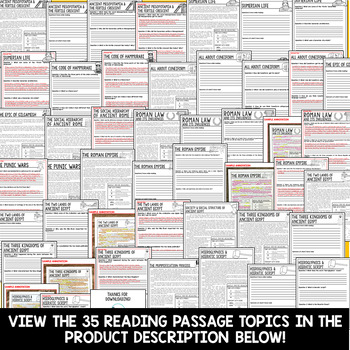 StudentSavvy
29.8k Followers
Follow
Easel Activities Included
Some resources in this bundle include ready-to-use interactive activities that students can complete on any device. Easel by TpT is free to use! Learn more.

Questions & Answer Keys for Each of the 40 Reading Passages!

What’s included in the bundle (overviews of each unit):

-semi-nomadic lifestyle, some villages with raised animals and crops

-Overview of Archaeology and the role of an archaeologist.

-Discoveries of artifacts (human-made objects) and fossils (human teeth, skull, and bones) and the discovery of how prehistoric people live.

3.) The Tools and Artifacts of the Stone Age

-Brief overview of how the early humans learned to make and control fire, as well as other important tools and discoveries. New technology and tools allowed for more control over their environment.

-The use of fire

-The use of wooden spears

- Utilized and experimented with bone, ivory, antler, and stone.

-Overview of lifestyle – hunter and gatherers were nomads. In their nomadic lifestyle, they migrated and followed animals to hunt.

They lived in small bands (20-50 people, including children), made up of several families.

-With the development of spears and specialized fishing tools, the hunters were able to catch larger amounts of prey to feed their small bands or families.

-Approx. 70,000-100,000 years ago, early humans migrated from Africa to parts of Asia and Europe. (They most likely migrated due to a depletion of resources and food)

-Overview of domestication of animals

Approx. 8000-9000 BC – learned to domesticate animals and grow plants, modifying their environment to address their needs

Sheep and goats 9000BC – raised them for clothes and food

-milk and meat products as well as clothing and shelter with skin. Used bones for weapons, needles, and other tools

-Irrigation – African farmers along the Nile were the first to use irrigation, built canals

Topics covered in this resource include:
1.) Mesopotamia and the Fertile Crescent
-location between the two rivers
-nomadic versus sedentary lifestyle
-what was needed for survival
-the fertile crescent today (no longer fertile)
Keywords: nomad, fertile crescent, hunter-gatherer

3.) The Code of Hammurabi
-overall description of his codes (strict, severe, cruel and unjust)
-description of how they affected society
Keywords: Theocracy, stele

4.) Cuneiform
-when and how it was first used
-tools and materials needed for writing
-how it changed society
Keywords: cuneiform, tablet, reed, stylus

5.) The Epic of Gilgamesh
-earliest form of literature
- description of independent stories that make a combined epic
-overview of the stories
-who is Gilgamesh? Was he a living person or a fictional character? (According to scholars, he probably was real. The legends that are in the Epic of Gilgamesh are greatly exaggerated and fictional, but a man named Gilgamesh may have existed.)
Keywords: immortality, epic, heroic

1.) The Two Lands of Ancient Egypt

Quick overview of topics covered in this resource include:
1.) The History of Ancient Israel
-description of 1,200 BC, when the Israelites first came to Canaan
-How the Israelities established their nation - Solomon later becomes King and builds the First Temple in Jerusalem
-after the death of King Solomon – kingdom splits into the northern and southern kingdoms
Keywords / Power Words: Monotheism, prophets, nomad, Hebrews, Judaism

2.) Migrating to Egypt & The Enslavement of the Israelites
- describes how the drought caused the Israelites to migrate after an extreme scarcity of food
-describes the enslavement in Egypt by a pharaoh until Moses frees them

3.) History of Judaism
-description of how it developed among ancient Hebrews, that eventually became a world religion
-describes how it later influenced Christian and Islamic religions of today
Keywords: First Temple, The Torah

4.) The Wisdom of King Solomon
-description of his reign over Israel during their Golden Age
-how he composed songs and proverbs
-great achievements, such as building the temple in Jerusalem
Keywords to include: The First Temple

5.) The Promised Land
-description of the land of Canaan
-area was rich in natural resources

2.) The Buddha: Siddhartha Gautama
-Describes his upbringing (born a prince) and his awareness of the pain of others compared to his privileged existence.
-His quest for enlightenment (sitting under the bodhi tree and meditation) becoming awakened
-What he learned and his teachings
-interesting/fun facts
Keywords: Buddhism, Bodhi tree (fig tree)

2.) The Bronze Age of Ancient China
-describes when it began and the types of materials used to create tools, weapons, decorative items, etc. that were created.
-description of spiritual beliefs and focus during this time – communicating with oracle bones / taotie masks to ward off evil spirits.
Keywords: bronze casting, oracle bones, taotie masks

3.) The Great Wall of China
-describes how it was designed to stop northern invaders (Mongols) from invading
-describes structure and length, facts
-describes how it was successful in keeping invaders out but many workers died while creating the wall
-compares to other past and present “walls” in society
Keywords: Great Wall, laborer, watch tower, beacon towers, and fortresses

4.) The Silk Road
-describes the routes and how traders used it
-Chinese merchants exported silk, spices, tea, and other goods
-describes the hazards that traders faced along the way (dangers of robbers, bad weather, illness, lack of water)
-How goods were transported (in caravans)
-The cultural impact that the Silk Road had to Ancient China (New religions were discovered: Buddhism movements ) New technologies and other useful information discussed and traded
Keywords: caravan, silk, Zhang Qian

5.) Ancient and Contemporary Philosophies: Confucianism and Daoism
Describes Confucius and his beliefs and values (education and self-improvement)
-reinforced The Mandate of Heaven belief
-Describes his book The Analects and some of his famous quotes
-Describes Daoism and the teachings of Laozi
-Famous sayings of Laozi from Tao Te Ching
-Compares and contrasts the two philosophies
Keywords: The Analects, The Mandate of Heaven, Daoism, Confucius, Confucianism

5.) Spartan Warriors and the Peloponnesian War -Description of how Spartans were trained at an early age in the military (taken from their family and sent away to become soldiers)
-Physical fitness seen as highly important
-Forward thinking in some aspects – Spartan women were educated and had rights of owning property.
-Demonstrates contrast, they were also barbaric and had a high slave population
Keywords: helots, ephors

-excelled with military and rose to power

-describes how they were able to maintain control and rule Italy

2.) The Social Hierarchy of Ancient Rome

3.) Roman Law and Its Influences

-Overview of system of government and laws

-describes how their ideas about laws and government influences our legal system today.

-Overview of the First, Second, and Third Punic Wars

-Describes Hannibal Barca of Carthage and what made him an effective leader (great military strategist of all time, crossing of the Alps, the creativity of using war elephants)

5.) The Roman Empire -Describes how it was a period of great growth, wealth and trade (however, there was still an enormous disparity between rich and poor.)

You may also enjoy: