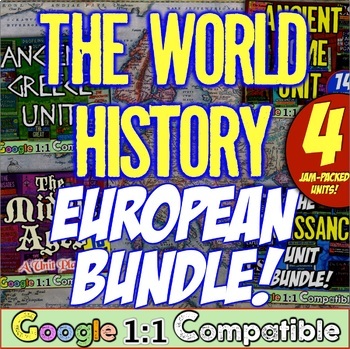 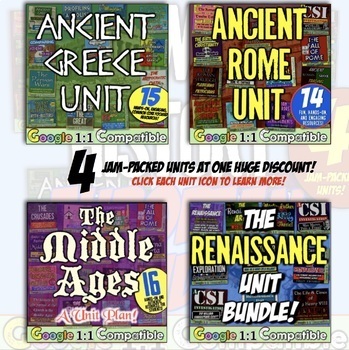 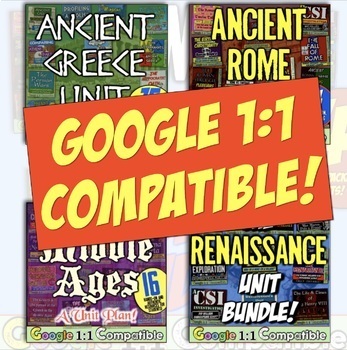 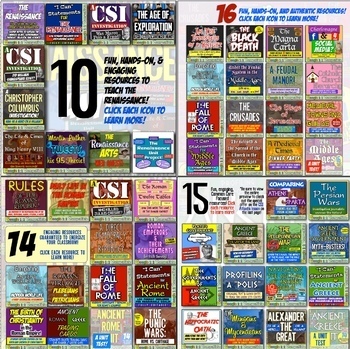 This Ancient Civilizations World History Curriculum Resource and Activity Bundle contains over 1,000 pages of engaging, hands-on, and interactive resources that are guaranteed to energize your ancient civilization or world history classroom. Each unit is filled with paper, in-class versions as well as engaging and interactive Google 1:1 versions that will allow students to type directly into the document. Choose the option that works best for you!

✔ 2.) The Earliest Ancient Greeks: Analyzing the Minoans and Mycenaeans!

✔ 4.) The Governments of Ancient Greece: Monarchy, Oligarchy, Tyranny and Democracy!

✔ 8.) A bonus lesson where students create a recruitment poster to convince other Greeks to join either Athens or Sparta!

✔ 11.) Alexander the Great: A Hero or a Villain? A common-core ready investigation!

✔ 13.) Plato, Ancient Greece, and Government: Which Government is best for Greece?

✔ 14.) Ancient Greece Test! 38 questions to accompany the unit from History with Mr E!

✔ 15.) Ancient Greece "I Can" statements and Learning Goal Log! Students track and measure their own learning! Very focused and holds students accountable!

✔ 9.) Christianity in Ancient Rome: The Rise and Spread! A Student Exploration!

✔ 14.) - Ancient Rome "I Can" statements and learning goal log where students track and measure their own learning! Very focused and holds students accountable!

✔ 15.) The Expansion of the Roman Republic! Timelining the growth of Ancient Rome!

✔ 16.) Gladiators and their Games! Life as a Gladiator in Ancient Rome! Fun & Engaging!

✔ 1.) The Fall of Rome DBQ Investigation!

✔ 2.) Charlemagne and Social Media? Creating a "profile" for this legendary king!

✔ 3.) Life in the Middle Ages! Detailing European Feudalism in First Person Accounts! Life as a Serf, Knight, Lord, or King!

✔ 4.) In the Footsteps of a Knight in the Middle Ages! Students write short stories!

✔ 5.) The Catholic Church Hierarchy & the Powers of the Church! Fun Graphic Organizer!

✔ 6.) The Growth and Spread of the Catholic Church in the Middle Ages!

✔ 7.) The Crusades Unit! Explaining the What, Why, and How! The 1st Crusade, Saladin, King Richard, and More!

✔ 8.) The Siege of Jerusalem, 1096 CE: Common Core and the Christian Perspective!

✔ 9.) The Magna Carta: Students Investigate the Principles then Analyze the Document! The Birth of Our Modern Government!

✔ 11.) Differences in Daily Life: Comparing the Ancient World to the Modern World!

✔ 12.) A Feudal Manor! Students examine a manor and draw conclusions about land use!

✔ 6.) The Age of Exploration Mini-Unit! A 6-Step Scavenger Hunt for 10 Explorers!

Be sure to also check out the World History Asian Bundle here! Engage your classroom about Ancient India, China, Medieval Japan, and Islam!

Total Pages
1,009 pages
Answer Key
Included
Teaching Duration
1 Year
Report this Resource to TpT
Reported resources will be reviewed by our team. Report this resource to let us know if this resource violates TpT’s content guidelines.

Log in
to see state-specific standards (only available in the US).
CCSSRH.6-8.10
By the end of grade 8, read and comprehend history/social studies texts in the grades 6–8 text complexity band independently and proficiently.
CCSSRH.6-8.9
Analyze the relationship between a primary and secondary source on the same topic.
CCSSRH.6-8.8
Distinguish among fact, opinion, and reasoned judgment in a text.
CCSSRH.6-8.7
Integrate visual information (e.g., in charts, graphs, photographs, videos, or maps) with other information in print and digital texts.
CCSSRH.6-8.6
Identify aspects of a text that reveal an author’s point of view or purpose (e.g., loaded language, inclusion or avoidance of particular facts).