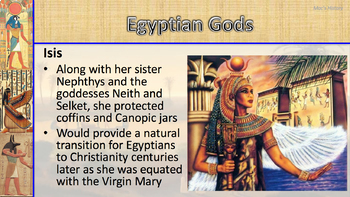 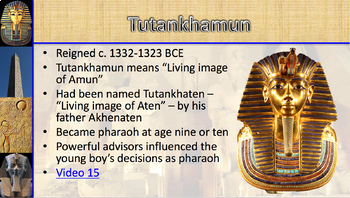 Buy all seven Ancient Egypt presentations and save. These dynamic presentations from the pre-dynastic period to the end of the New Kingdom provide visuals, video links, guided notes, and reflection questions to keep your students engaged for the entire lesson.

Lesson 1: The Unification of Egypt

The unification of Egypt began the rise of one of the longest lasting civilizations in history. Based on the Nile river and with an abundance of natural resources, Egypt was destined to be a unique and stable society.

♦ Natural Protection of the Region

♦ The Unification of Egypt

The Old Kingdom of Egypt was the age of the Pyramids. This society, so wealthy and secure, was able to build wonders that stand the test of time. It produced the world's first genius, Imhotep, and began the tradition of the god-king known as the pharaoh.

♦ The Nature of the Pharaoh

♦ Government of the Old Kingdom

♦ Society of the time

♦ Construction & Significance of the Pyramids

♦ The Genius of Imhotep

♦ The End of the Old Kingdom

The Egyptian's connection with death and resurrection was central to their worldview. Their spiritual beliefs were shaped by their natural world and provided guidance to their lives.

♦ The Nature of Egyptian Religion

♦ The Different Gods and Goddesses

♦ The Book of the Dead

♦ The Impact of Religion on Egyptian Society

Life in Egypt remained relatively unchanged for hundreds and thousands of years. Family was crucial important as was their religion. From this resource blessed region developed one of the greatest societies of the ancient world.

♦ The Role of the Pharaoh

The New Kingdom of Egypt produced some of the most remarkable monuments and pharaohs in history. Egypt expanded past its traditional borders and dominated the Bronze-Age World.

♦ Fall of the Egyptian Empire