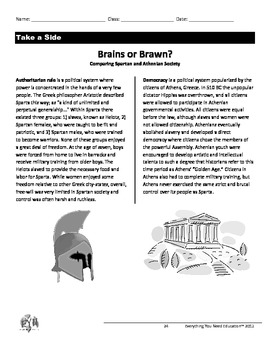 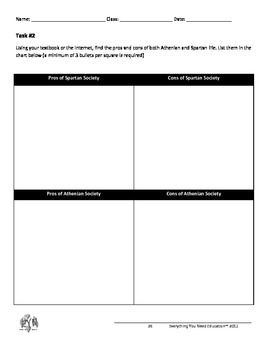 (1 MB|6 pages)
Product Description
The slight differences between classical Athens and Sparta are magnified in this lesson because it provides for good issue-based discussion. In reality Athens and Sparta were both fairly militaristic, and at other times both were fairly democratic. Contrary to the way they are commonly portrayed, Athens had a powerful army and navy, and Sparta had an Assembly of elected members. But as we deal with discussing the early development of civilizations, it is useful to portray Sparta as simplistically militaristic and Athens as sophisticated and modern. Not that this is not true to any extent, but it is purposely exaggerated because the overarching principle in this lesson is not the study of Sparta or Athens, but how nations should focus their development: Knowledge or strength? Brains or brawn?

This lesson is perfectly differentiated to include a thought-based introduction, independent study, group work, creativity and artistic effort, while concluding with a presentation.

The assignment meets Common Core requirements and can be used independently as a skill building activity or as part of our larger Ancient Greece unit which is available for purchase.


Ancient Greece Lesson: Athens vs. Sparta (Brains vs. Brawn) by Everything You Need is licensed under a Creative Commons Attribution-NonCommercial 3.0 Unported License.
Total Pages
6 pages
Answer Key
N/A
Teaching Duration
3 days
Report this Resource to TpT
Reported resources will be reviewed by our team. Report this resource to let us know if this resource violates TpT’s content guidelines.

Everything You Need Education

382 Followers
Follow
More products from Everything You Need Education