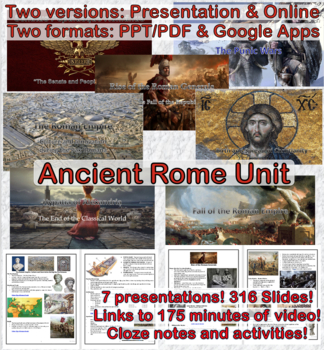 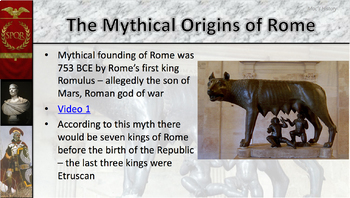 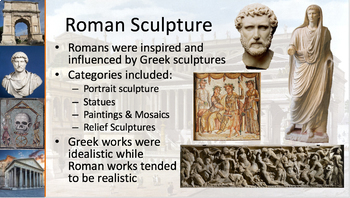 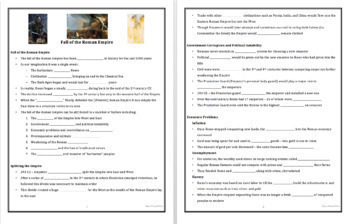 Rome began as a small village on a hill by a river. It grew into one of the greatest empires in history. The story of how that journey began is a mix of legend and truth. From this mix arose a society that still influences us today.

♦ Origins of the Roman State

♦ The influence of the Etruscans

♦ Evolution of democracy in Rome

Two great empires would face off in a series of devastating conflicts: Carthage and Rome. Only one would emerge as the ruler of the Mediterranean World.

♦ A brief background on Carthage

♦ Hannibal's march over the Alps and into Italy

During the 1st century BCE, Rome was the preeminent power in the Mediterranean world. With that power came wealth and corruption. The only individuals who were able to maintain control were the generals. These generals would eventual take complete control and the Republic with all its ideals would fall. In its place would rise the Empire and the Emperors.

♦ The Struggles between Marius and Sulla

♦ Spartacus and the Slave Rebellion

♦ The Rise of Augustus Caesar

During the Pax Romana Rome was at the height of its power and influence. During this period the Romans developed technologies that would be the wonder of the world and, after the fall or Rome, would not be duplicated for centuries.

This epic PowerPoint showcases life at the height of the Roman Empire - the Pax Romana. Topics presented include:

♦ Life for a Roman family

♦ Entertainment such as chariot races and gladiator fights

♦ The legacy left by Rome for the modern world

The beginnings of Christianity began slowly but once it began rolling it spread quickly. Against the backdrop of the Roman Empire this new religion found converts and would ultimately change the very civilization that had sought to repress it.

♦ Judaism and Rome in Judea

Discover the life of this remarkable woman set against the backdrop of the declining Roman Empire and amongst self-serving, ambitious leaders using the fledgling religion of Christianity to create a power-base of fundamentalists. An important lesson for the modern world and critical to any Rome unit.

♦ The City of Alexandria

♦ Role of Women in Late Antiquity

♦ Christianity in the Early 5th Century

♦ Struggles Between Secular and Religious Leaders

The fall of the Roman Empire did not happen because of one reason. A number of factors contributed to the weakening of the state before if finally crumbled in the West in the late 5th century. It would continue in the East for many centuries though culturally it would evolve into something quite different than the Rome of Caesar.

♦ Splitting of the Empire into East and West

♦ Economic Problems of Unemployment and Slavery

♦ Weakening of the Roman Army

♦ A Brief Epilogue about the Byzantium Empire