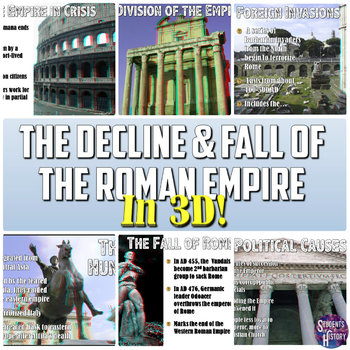 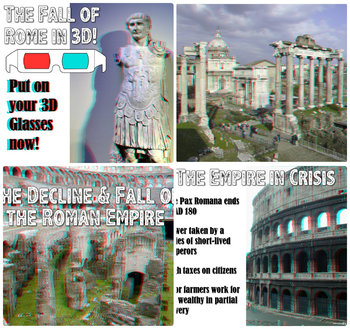 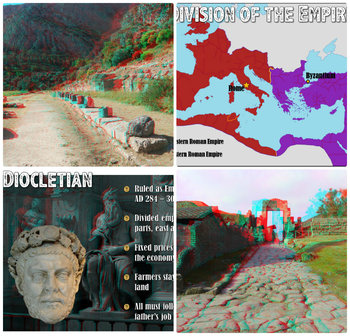 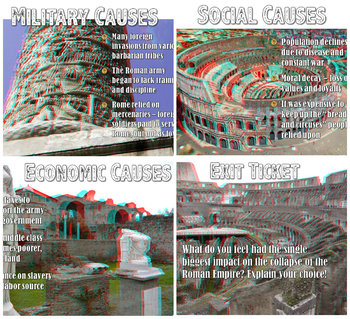 This amazing 3D PowerPoint on the fall of Rome and the end of the Roman Empire will be a huge hit and truly captivate your students!

This is based on my Decline and Fall of the Roman Empire PowerPoint Lesson, but includes 21 amazing 3D images across 22 slides!

The PowerPoint includes a corresponding printable guided notes page as well! Together, they provide background on the reasons for Rome's decline, the last emperor that tried to save the empire, and the Barbarian groups that finally sacked Rome.

In addition to the 3D images, there's also maps and graphics to engage your students and keep them focused on your lesson. The notes are easy to follow and understand. Topics covered include

★ The Pax Romana
★ Emperor Diocletian's reforms
★ The division of the Roman Empire
★ The Edict of Milan
★ Emperor Constantine and the founding of Constantinople
★ Barbarian invasions
★ The Huns, Visigoths, Vandals
★ Social, political, economic, & military causes for Rome's fall
★ And more!

This is definitely one of the most engaging PowerPoints you will ever use. I pass out 3D glasses to students as they enter the room and their excitement is so contagious. Engagement for this lesson is always through the roof. This is a guaranteed amazing lesson your students will remember years later!

The 3D images work with simple, cheap red/cyan anaglyph cardboard glasses. These can be purchased in bulk from Amazon or eBay and definitely worth it for how engaging the lesson can be! You can find more of my 3D PowerPoint lessons here.

This resource can also be downloaded as part of the larger, discounted Roman Empire Unit Bundle!

Please "Like" my page on Facebook for updates, giveaways, links and more! Thanks!
Total Pages
22 pages
Answer Key
N/A
Teaching Duration
50 minutes
Report this Resource to TpT
Reported resources will be reviewed by our team. Report this resource to let us know if this resource violates TpT’s content guidelines.