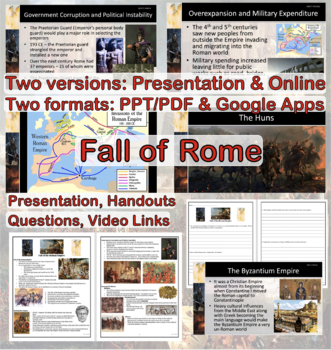 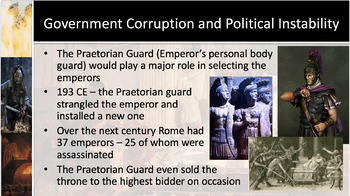 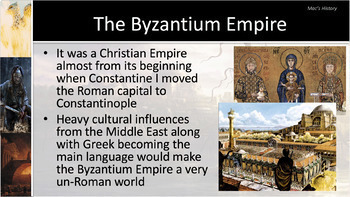 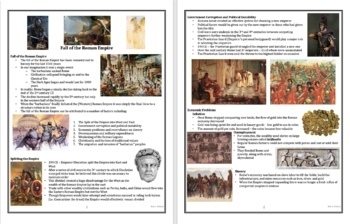 All the foundational information your students need to build their knowledge, interest, and skills upon. Concise information in point form with stunning images and thought-provoking questions. **

The fall of the Roman Empire did not happen because of one reason. A number of factors contributed to the weakening of the state before if finally crumbled in the West in the late 5th century. It would continue in the East for many centuries though culturally it would evolve into something quite different than the Rome of Caesar.

♦ Splitting of the Empire into East and West

♦ Economic Problems of Unemployment and Slavery

♦ Weakening of the Roman Army

♦ A Brief Epilogue about the Byzantium Empire

The first is a PowerPoint for those teachers who know the material and want to guide their students through the material. This class takes approximately 2 hours to complete. There are five links to Youtube in the presentation. The videos total ~ 39 minutes. Youtube links are checked weekly and updated when necessary. There are handouts for note taking along with reflection questions included with this presentation.