Ancient Rome: Rise of the Generals and the Fall of the Republic 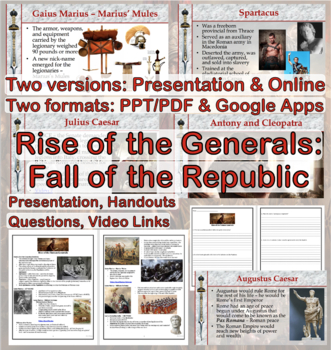 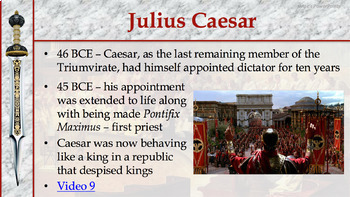 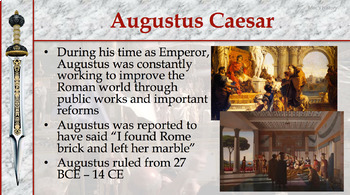 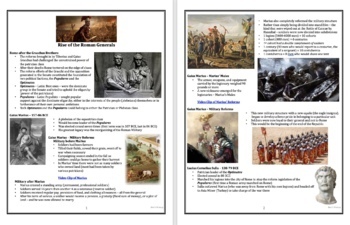 All the foundational information your students need to build their knowledge, interest, and skills upon. Concise information in point form with stunning images and thought-provoking questions. **

During the 1st century BCE, Rome was the preeminent power in the Mediterranean world. With that power came wealth and corruption. The only individuals who were able to maintain control were the generals. These generals would eventual take complete control and the Republic with all its ideals would fall. In its place would rise the Empire and the Emperors.

♦ The Struggles between Marius and Sulla

♦ Spartacus and the Slave Rebellion

♦ The Rise of Augustus Caesar

The first is a Presentation - PowerPoint/Google Slides - for those teachers who know the material and want to guide their students through the material. This class takes approximately 90-minutes. There are handouts for note taking along with reflection questions included with this presentation. There are nine links to Youtube in the presentation. The videos total ~ 23 minutes. Youtube links are checked weekly and updated when necessary.

Total Pages
44 pages
Answer Key
N/A
Teaching Duration
90 minutes
Report this Resource to TpT
Reported resources will be reviewed by our team. Report this resource to let us know if this resource violates TpT’s content guidelines.