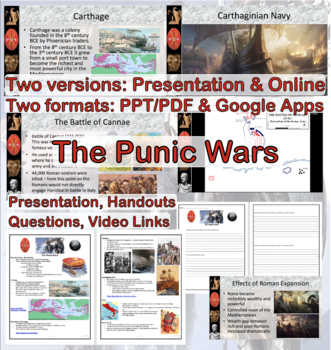 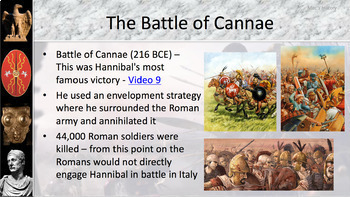 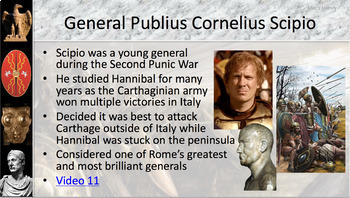 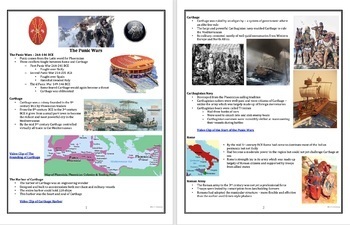 239 Followers
Follow
More products from Mac's History
$8.50
Digital Download
Report this resource to TpT
Also included in:
This dynamic presentation on the Punic Wars provides visuals, video links, guided notes, and reflection questions to keep your students engaged for the entire lesson. This is the war that shaped the Ancient Western World!

Two great empires would face off in a series of devastating conflicts: Carthage and Rome. Only one would emerge as the ruler of the Mediterranean World.

Topics covered in this presentation include:
♦ A brief background on Carthage
♦ The Carthaginian Navy
♦ The Roman Army
♦ The First Punic War
♦ The Second Punic War
♦ Hannibal's march over the Alps and into Italy
♦ Battle of Cannae
♦ Scipio Africanus
♦ The Third Punic War
♦ Destruction of Carthage

It finishes with an analysis of how these wars impacted Rome and ultimately led it down the path to becoming an empire.

There are thirteen links to Youtube in the presentation. The videos total ~ 45 minutes. Youtube links are checked weekly and updated when necessary.

There are handouts for note taking along with reflection questions included with this presentation.