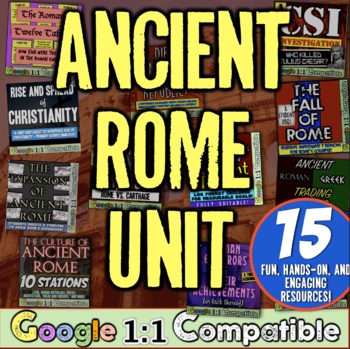 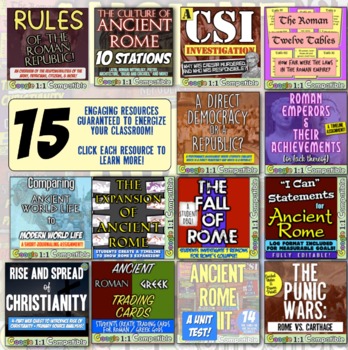 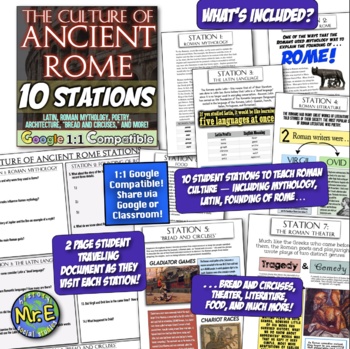 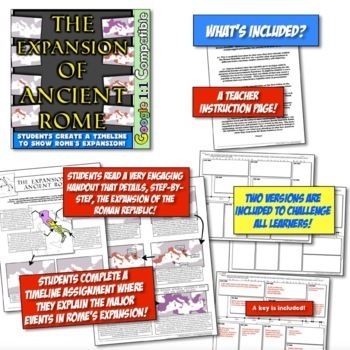 In this Ancient Rome & Roman Empire Resources Unit, you receive 15 activities to teach ancient Rome, the Roman Empire, the rise of Julius Caesar, the Roman Republic, the Rise of Christianity, and much more! My ancient Rome unit bundle is filled with Google 1:1 ready resources and activities that will excite your classroom on your study of Ancient Rome. Since traditional and 1:1 digital versions are included, this unit is ideal for distance learning. This bundle saves you over 30% instead of buying each activity separate!

The 15 lessons that are included in this Ancient Rome and Roman Empire Unit are:

**A bonus Roman Empire map and geography resource has been added at no additional charge!**

✔ 1.) Roman Republic and its Expansion! Time-lining the growth of Ancient Rome!

✔ 11.) The Julius Caesar Assassination CSI Investigation! Who killed Caesar and why was he killed?

✔ 13.) Gladiators and their Games! Life as a Gladiator in Ancient Rome! Fun & Engaging!

✔ 15.) Ancient Rome "I Can" statements and learning goal log where students track and measure their own learning! Very focused and holds students accountable!

All activities have been tested, tried, and tweaked over time to provide an engaging, successful learning opportunity with middle school students. Very fun, exciting, and hands-on!

Wanting additional supplements to enhance your instruction? Check out these amazing add-ons below:

✩The Expansion of the Roman Republic! Timelining the growth of Ancient Rome!

✩Gladiators and their Games! Life as a Gladiator in Ancient Rome! Fun & Engaging!

This unit is also included in larger curriculum bundles designed to save you money!

Total Pages
239 pages
Answer Key
Included
Teaching Duration
2 months
Report this Resource to TpT
Reported resources will be reviewed by our team. Report this resource to let us know if this resource violates TpT’s content guidelines.

Log in
to see state-specific standards (only available in the US).
CCSSRH.9-10.10
By the end of grade 10, read and comprehend history/social studies texts in the grades 9–10 text complexity band independently and proficiently.
CCSSRH.9-10.9
Compare and contrast treatments of the same topic in several primary and secondary sources.
CCSSRH.9-10.8
Assess the extent to which the reasoning and evidence in a text support the author’s claims.
CCSSRH.9-10.7
Integrate quantitative or technical analysis (e.g., charts, research data) with qualitative analysis in print or digital text.
CCSSRH.9-10.6
Compare the point of view of two or more authors for how they treat the same or similar topics, including which details they include and emphasize in their respective accounts.