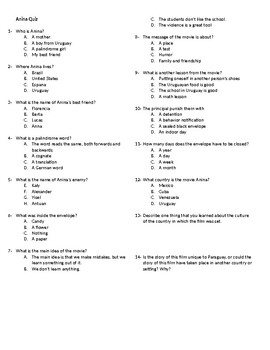 Anina is a 2013 Uruguayan-Colombian animated film directed by Alfredo Soderguit. The film was selected as the Uruguayan entry for the Best Foreign Language Film at the 86th Academy Awards. The main idea in this film is that we make mistakes, but we learn something out of it, that's what school is for to teach us. With this movie students will review and learn about school traditions in some of the Hispanic countries. Students will learn that Anina present a different cultural perspective in a medium sporadically developed in Latin America, it is a classic tale with a message about family and friendship packed with intelligent humor. It is about putting oneself in another person’s shoes and realizing that sometimes the huge problems that cause headaches are not as relevant as long as the truly important things are still in place. There is no one better than a child to teach a lesson about what really matters. The film defies convention by not trying to Americanize its concept, but rather embracing its own Uruguayan peculiarities that also apply, and will surely connect, to other Latin American countries. The magnitude of Anina’s problems can only be explained by her age, and such a charming perspective makes the film really special.

This is a Quiz that a teacher can use after the students watch the movie.