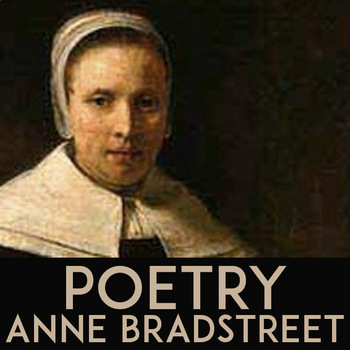 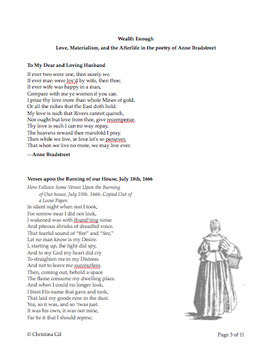 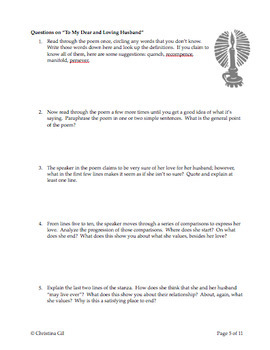 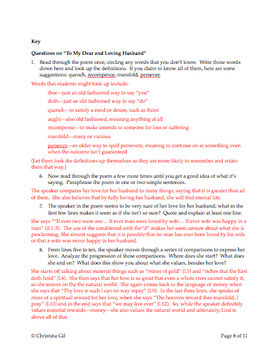 "To My Dear and Loving Husband" and "Upon the Burning of our House" are great poems to introduce colonial america, Puritan world view, and early American Literature.

As one of the first poets of the nation, Bradstreet’s ideas on love, life, materialism, and the afterlife reflect many popular views of her era.

--copies of both poems with engaging graphics

--questions on both poems that encourage close reading and literary analysis

--answer keys for all questions

This lesson is aimed at an honors or AP level class. Lower level classes may struggle with some of the older language. Still, with more direction—by taking them through the poem and asking them to focus on specific words and phrases—they will gain a sufficient understanding of the text.

Paired Texts: These poems could be taught in a unit on early American Literature, including texts such as “Sinners in the Hands of an Angry God.” They could also be taught with books written later about the Puritan era, such as The Scarlet Letter or The Crucible. Texts that deal with love and materialism including The Great Gatsby and The Death of a Salesman would also be good matches.

Total Pages
9 pages
Answer Key
Included
Teaching Duration
Unknown
Report this Resource to TpT
Reported resources will be reviewed by our team. Report this resource to let us know if this resource violates TpT’s content guidelines.

Log in
to see state-specific standards (only available in the US).
CCSSRL.11-12.1
Cite strong and thorough textual evidence to support analysis of what the text says explicitly as well as inferences drawn from the text, including determining where the text leaves matters uncertain.
CCSSRL.11-12.2
Determine two or more themes or central ideas of a text and analyze their development over the course of the text, including how they interact and build on one another to produce a complex account; provide an objective summary of the text.
CCSSRL.11-12.4
Determine the meaning of words and phrases as they are used in the text, including figurative and connotative meanings; analyze the impact of specific word choices on meaning and tone, including words with multiple meanings or language that is particularly fresh, engaging, or beautiful.
CCSSRL.11-12.5
Analyze how an author’s choices concerning how to structure specific parts of a text (e.g., the choice of where to begin or end a story, the choice to provide a comedic or tragic resolution) contribute to its overall structure and meaning as well as its aesthetic impact.
CCSSRL.11-12.6
Analyze a case in which grasping point of view requires distinguishing what is directly stated in a text from what is really meant (e.g., satire, sarcasm, irony, or understatement).