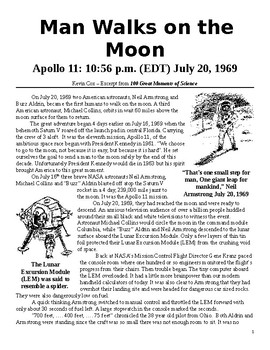 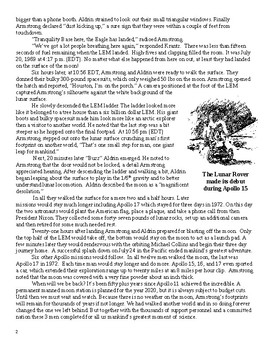 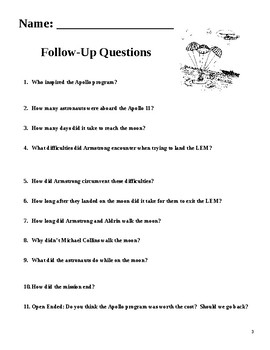 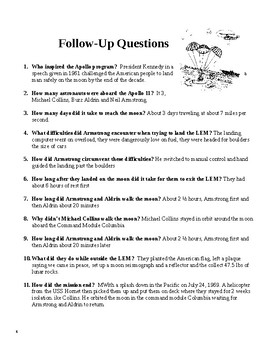 (548 KB|5 pages)
Product Description
On July 20, 1969 two American astronauts, Neil Armstrong and Buzz Aldrin, became the first humans to walk on the moon. A third American astronaut, Michael Collins, orbits in wait 60 miles above the moon surface for them to return.
The great adventure began 4 days earlier on July 16, 1969 when the behemoth Saturn V roared off the launch pad in central Florida, carrying the crew of 3 aloft. It was the eleventh mission, Apollo 11, of the ambitious space race begun with President Kennedy in 1961. “We choose to go to the moon, not because it is easy, but because it is hard”. He set ourselves the goal to send a man to the moon safely by the end of this decade. Unfortunately President Kennedy would die in 1963 but his. ....
Here is a 2 page literacy article of their story along with a page of follow-up questions. It is excerpt from Kevin Cox's award winning book "100 Great Moments of Science" available in print from Amazon on online on TPT
Total Pages
5 pages
Answer Key
Included
Teaching Duration
30 minutes
Report this Resource to TpT
Reported resources will be reviewed by our team. Report this resource to let us know if this resource violates TpT’s content guidelines.