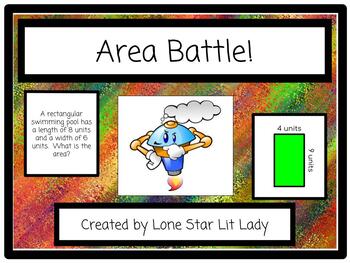 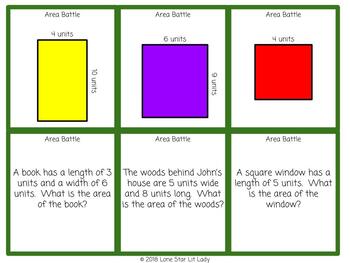 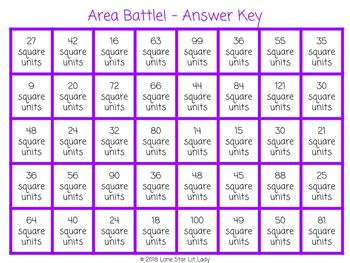 Area Battle is a fun way for students to solve for and compare the area of rectangles. This game is meant to be played in pairs. The game can be played during guided math groups or in math work stations while you teach small groups.

- Each set has the same questions or pictures with different unit lengths (ranging from x2 to x12).

- One recording sheet that can be copied for all players

Each set contains 40 playing cards and 1 card with game instructions.

Please check out the preview before purchasing and enjoying!

Log in to see state-specific standards (only available in the US).
CCSS4.MD.A.3
Apply the area and perimeter formulas for rectangles in real world and mathematical problems. For example, find the width of a rectangular room given the area of the flooring and the length, by viewing the area formula as a multiplication equation with an unknown factor.
CCSS3.MD.C.7b
Multiply side lengths to find areas of rectangles with whole-number side lengths in the context of solving real world and mathematical problems, and represent whole-number products as rectangular areas in mathematical reasoning.
CCSS3.MD.C.7a
Find the area of a rectangle with whole-number side lengths by tiling it, and show that the area is the same as would be found by multiplying the side lengths.
CCSS3.MD.C.7
Relate area to the operations of multiplication and addition.
CCSS3.MD.C.6
Measure areas by counting unit squares (square cm, square m, square in, square ft, and improvised units).
Total Pages
28 pages
Answer Key
Included
Teaching Duration
N/A
Report this Resource to TpT
Reported resources will be reviewed by our team. Report this resource to let us know if this resource violates TpT’s content guidelines.