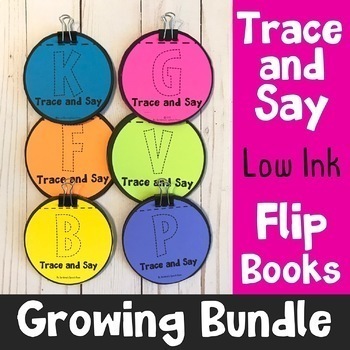 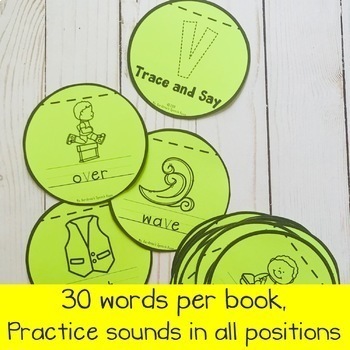 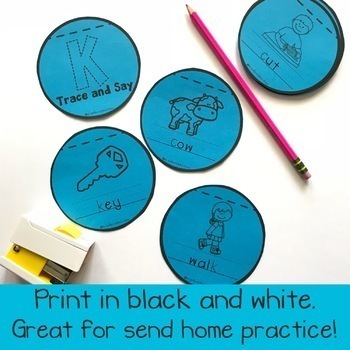 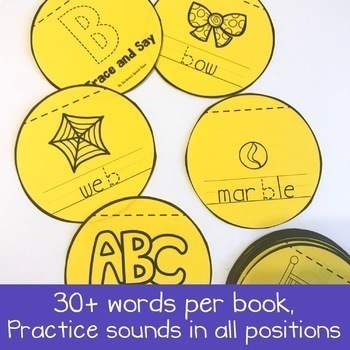 Each set in the bundle includes 30+ words targeting initial, medial and final sounds making phonemic awareness fun and interactive! Each page of the flip book is a 3.75" circle.

Great for a send home activity!

Attach a loose leaf ring or use a binder clip to fasten together.

Laminate to use in five min speech drills.

The last page has a place for parent signature and date.

This activity correlates well with common core and state standards such as TEKS for PreKindergarten and Kindergarten.

For a discounted bundle of Trace and Say Re-Usable Task Cards:

★ Trace and Say: Articulation P and B

Log in
to see state-specific standards (only available in the US).
CCSSRF.K.2c
Blend and segment onsets and rimes of single-syllable spoken words.
CCSSRF.K.2d
Isolate and pronounce the initial, medial vowel, and final sounds (phonemes) in three-phoneme (consonant-vowel-consonant, or CVC) words. (This does not include CVCs ending with /l/, /r/, or /x/.)
CCSSRF.K.2e
Add or substitute individual sounds (phonemes) in simple, one-syllable words to make new words.
CCSSRF.K.3
Know and apply grade-level phonics and word analysis skills in decoding words.
CCSSRF.K.3a
Demonstrate basic knowledge of one-to-one letter-sound correspondences by producing the primary sound or many of the most frequent sounds for each consonant.