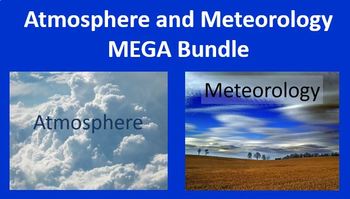 This PowerPoint and bundle starts with distinguishing between weather and climate and continues discussing weather conditions and observation. For temperature, it is measured with a thermometer and when combined with humidity can cause heat stress. During air pressure, highs, lows, isobars and barometers are discussed.

Wind speed and wind direction instruments are introduced as are naming winds and the Beaufort Scale for wind speed is explained.

The next topic is water in the atmosphere, so the water cycle, humidity, dew point, clouds and precipitation are explained. Use of a sling psychrometer is explained with relative humidity.

Types of air masses and how air masses interact are discussed with fronts. Cold, warm, stationary and occluded fronts and predicting weather conditions are explained.

Finally, the topic of severe weather, hurricanes and tornadoes are investigated. Hurricanes form in warm, ocean waters while tornadoes form during thunderstorms. More formation information is included as is the Saffir-Simpson Scale (hurricanes) and the EF Scale (tornadoes). And of course, there is the discussion of Tornado Alley.

The lab associated with the bundle is a favorite of students. Students go outside for 4-5 days to collect weather data, including temperature, wind speed and direction, air pressure, cloud type, precipitation, and relative humidity.

Also included in this MEGA bundle is the Test Super Bundle:

Total Pages
135 pages
Answer Key
Included
Teaching Duration
1 Week
Report this Resource to TpT
Reported resources will be reviewed by our team. Report this resource to let us know if this resource violates TpT’s content guidelines.