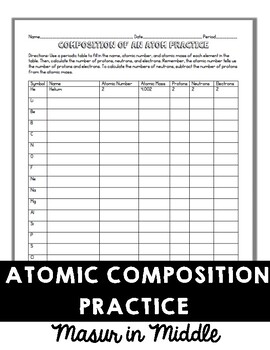 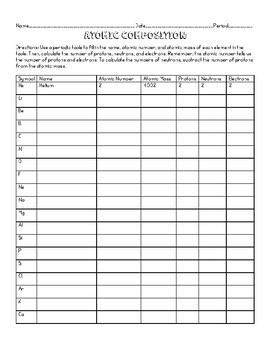 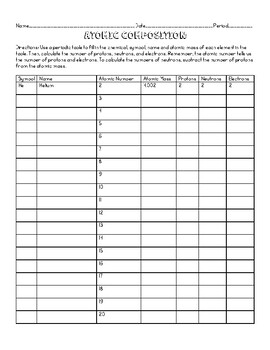 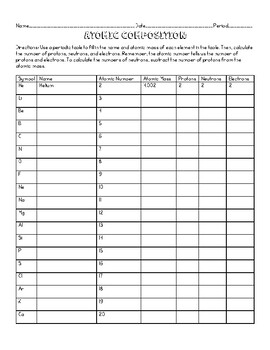 With this worksheet, students relate the number of protons, electrons, and neutrons to an element's atomic mass and atomic number. Included in this purchase are four different versions of a similar worksheet. Two include either atomic number or chemical symbol, one include both atomic number and chemical symbol, and one is a blank table (with an example row) so that students can pick their own elements to fill in. All worksheets are included in both English and Spanish versions.

This is designed for students to use AFTER they have already learned the parts of an atom. Knowledge of how to calculate the number of protons, neutrons, and electrons from the atomic number and mass is recommended, but not necessary.

Log in to see state-specific standards (only available in the US).
NGSSMS-PS1-1
Develop models to describe the atomic composition of simple molecules and extended structures. Emphasis is on developing models of molecules that vary in complexity. Examples of simple molecules could include ammonia and methanol. Examples of extended structures could include sodium chloride or diamonds. Examples of molecular-level models could include drawings, 3D ball and stick structures, or computer representations showing different molecules with different types of atoms. Assessment does not include valence electrons and bonding energy, discussing the ionic nature of subunits of complex structures, or a complete depiction of all individual atoms in a complex molecule or extended structure.
Total Pages
N/A
Answer Key
Included
Teaching Duration
N/A
Report this Resource to TpT
Reported resources will be reviewed by our team. Report this resource to let us know if this resource violates TpT’s content guidelines.