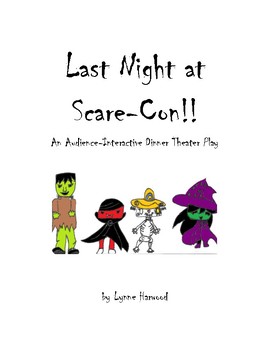 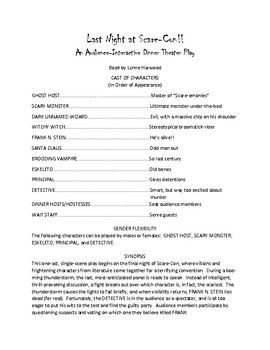 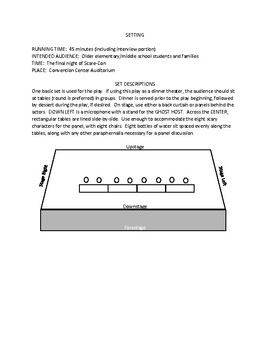 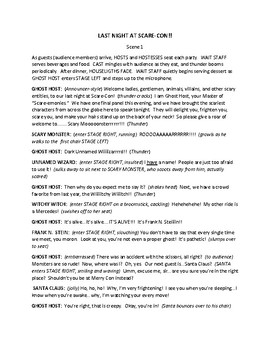 An original script, for use in a Theater Department or Drama Club! In this audience-interactive murder mystery, the audience interviews the characters and attempts to determine the guilty party. This play has ten speaking parts, is approximately 45 minutes long, and can also be used as a Dinner Theater fundraiser.

Here is the synopsis:

This one-act, single-scene play begins on the final night of Scare-Con, where villains and frightening characters from literature come together for a terrifying convention. During a boo-ming thunderstorm, the last, most-anticipated panel is ready to speak. Instead of intelligent, thrill-provoking discussion, a fight breaks out over which character is, in fact, the scariest. The thunderstorm causes the lights to fail briefly, and when visibility returns, Frank N. Stein lies dead (for real). Fortunately, a Detective is in the audience as a spectator, and is all too eager to put his wits to the test and find the guilty party. Audience members participate by questioning suspects and voting on which one they believe killed Frank. With characters ranging from a vampire to Santa Clause (he sees you when you're sleeping, you know), witty dialogue will keep your audience engaged and entertained.

Along with the entire script, there are ideas for costumes and casting, and materials for audience participation.

Thanks for previewing my script! For more lesson plans and activities see my store, The Literacy Lounge!