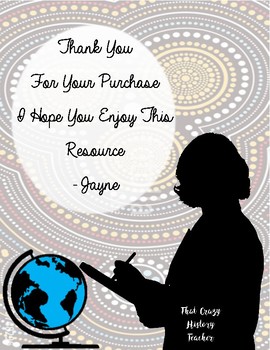 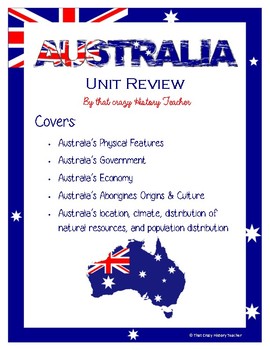 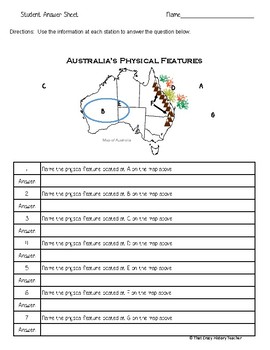 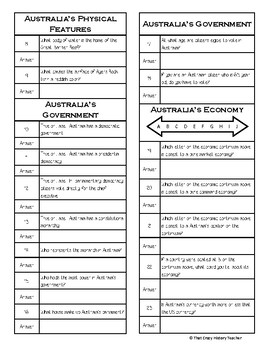 This is a great resource for a unit on Australia. It matches the Georgia Standards of Excellence for Australia. This can be used in many different ways. I use it as a station activity. I post the information cards around the classroom. Students then use the information sheets to answer questions on the provided response sheet. This could be used as a review before a test, as a refresher or as new material. Everything you need is included.

Included in this set:

This covers these Georgia Standards of Excellence

a. Describe how Australia’s location, climate, and natural resources impact trade and affect where people live.

a. Explain citizen participation in democratic governments [i.e. the role of citizens in choosing the leaders of Australia (parliamentary democracy)].

a. Compare how traditional, command, and market economies answer the economic questions of 1-what to produce, 2-how to produce, and 3-for whom to produce.

b. Explain that countries have a mixed economic system located on a continuum between pure market and pure command.

SS6E11 Give examples of how voluntary trade benefits buyers and sellers in Australia.

a. Explain how specialization makes trade possible between countries.

b. Compare and contrast different types of trade barriers, such as tariffs, quotas, and embargoes.

c. Explain why international trade requires a system for exchanging currency between nations.

SS6E12 Describe factors that influence economic growth and examine their presence or absence in Australia.

a. Evaluate how literacy rates affect the standard of living.

b. Explain the relationship between investment in human capital (education and training) and gross domestic product (GDP per capita).

c. Explain the relationship between investment in capital goods (factories, machinery, and technology) and gross domestic product (GDP per capita).

d. Describe the role of natural resources in a country’s economy.

e. Describe the role of entrepreneurship.

SS6E13 Understand that a basic principle of effective personal money management is to live within one’s income.

a. Understand that income is received from work and is limited.

b. Understand that a budget is a tool to plan the spending and saving of income.

c. Understand the reasons and benefits of saving.

d. Understand the uses and costs of credit.

L6-8RHSS4: Determine the meaning of words and phrases as they are used in a text, including vocabulary specific to domains related to history/social studies.

L6-8RHSS7: Integrate visual information (e.g., in charts, graphs, photographs, videos, or maps) with other information in print and digital texts.

L6-8RHSS8: Distinguish among fact, opinion, and reasoned judgment in a text.

L6-8RHSS10: By the end of grade 8, read and comprehend history/social studies texts in the grades 6–8 text complexity band independently and proficiently.

Total Pages
25 pages
Answer Key
Included
Teaching Duration
55 minutes
Report this Resource to TpT
Reported resources will be reviewed by our team. Report this resource to let us know if this resource violates TpT’s content guidelines.