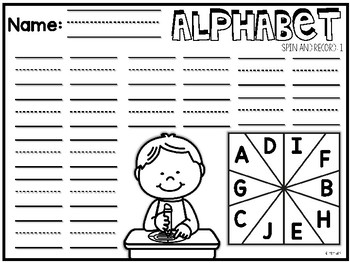 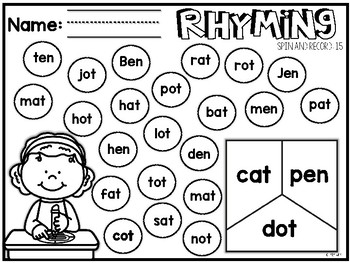 Save BIG by purchasing the BASIC Literacy Centers bundle!

Thanks so much for viewing my Basic Literacy Centers: Spin and Record Packet. This packet is designed to offer a fun and engaging way to practice literacy skills. You will be able to use these spin and record centers as a supplement to your whole-group lesson and/or as an independent center option.

To prep the centers, simply print the skill sheets and place them into a sheet protector. The students can also use counters to cover their answers. If you are not wanting to reuse the sheets, students can use dabbers or markers to note the answers.

What are the BASIC centers?

Have you ever thought, “I wish I had a set of centers that did not need to take precious class time to teach and reteach again. If only there was a set of basic centers that maintained the same systematic routine and just swapped skills!” Well, wait and fret no more! Basics Literacy Centers is just that! These BASIC center packets cover the same set of skills throughout. For example, if your students are working on CVC words you can choose activities from the write the room packet. Let’s say your kids are then ready for digraphs! You will simply pull the digraph version of each and your students will not need to be taught how to play the center because they just learned the concept during the CVC centers. This reduces that time of teaching and reteaching completely! You are now able to swap the skill and keep on trucking along!

* NO THEMES so you can use them throughout the year.
* Center stays the same-- skills change/build in rigor through the year.

How many spin and record centers are included?

What skills are covered?

Please email me at littlemindsatworkllc@gmail.com Thanks!

Visit my blog Little Minds at Work
Follow me on Facebook
Total Pages
93 pages
Answer Key
N/A
Teaching Duration
N/A
Report this Resource to TpT
Reported resources will be reviewed by our team. Report this resource to let us know if this resource violates TpT’s content guidelines.