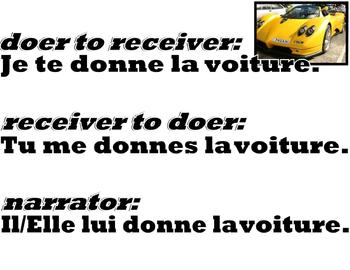 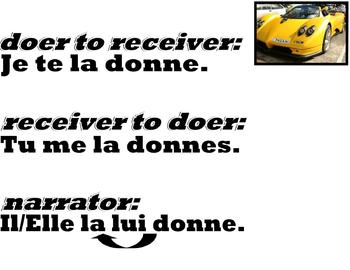 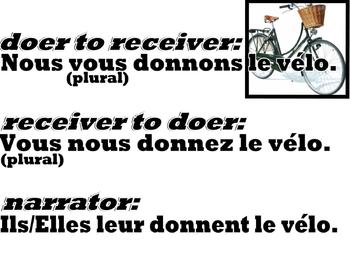 (10 MB|48 pages)
Product Description
I did a maternity leave substitute teaching job for a French teacher. Having taught Spanish for 30 years and having studied 15 college hours of French in the latter part of the 20th Century, I was considered the “most qualified” sub. Notice the quotation marks.
One of the topics that we had to “study” was double-object pronouns. I had trouble understanding those back in the last century, but it seemed to get through my thick skull finally. Having just started experimenting with visual lessons on the computer (remember I was teaching when the Overhead Projector was the height of technology), I tried to see if I could help the students “see” what happens when two object pronouns meet.
I am sharing this with you because, well, it is just sitting here on my computer doing nobody any good, and I thought there might be someone out there who would find it somewhat helpful.
In each situation, we have the doer, receiver and narrator. We say each sentence from all three points of view. It seemed to really help the students deal with their written assignments.
Pam Kaatz kaatz@airmail.net
THIS ANECDOTE WAS PUBLISHED IN THE TEXAS FOREIGN LANGUAGE ASSOCIATION JOURNAL:
When asked to do a long-term subbing assignment for a French teacher, I felt I was living the old Spanish proverb:
En el país de los ciegos, el tuerto es rey.
(In the land of the blind, the one-eyed man is king.)
There were no other subs with any knowledge of French, making the district the "land of the blind," and making me the "one-eyed man."
First year classes were no challenge as I was able to understand the grammar and vocabulary, but the second year class was getting just beyond my level. My 15 hours of French had had 35 years to fade in my memory!!
One day the word faux came up when the students were asked to respond vrai or faux—true or false. I did a little spontaneous lesson about the phrase faux pas. Not one of the 28 teenagers had ever heard the phrase used in English. After explaining that it literally means false step, I further explained that we use it to mean an accidental social blunder.
I gave the example of inviting my niece and her new husband to dinner, ordering pepperoni and sausage pizza for all of us, then remembering that his religion did not permit him to eat pork.
I predicted that, as it often happens when one learns a new word, within a few days, maybe even a week or a month, they would hear faux pas being used on TV, read it in a book, or notice it in a real-life situation.
Then we began watching the video lesson provided by the textbook in which it seemed to me that the boy was attempting to ask the girl out on a date, but she kept coming up with excuses. Since it was the second year class, I was not quite sure that I was understanding everything, so I paused the video.
Just as I was about to pose my question, a vice-principal knocked on the door and asked to speak to one of the girls. As she was walking toward the door to speak to him, I continued with my pending question concerning what was going on in the video:

“Is he trying to ask her for a date?”
Total silence. You could even hear people breathing.
I turned to the class and asked, “Well, is he or not?”
Pointing to the screen, I said something like: “It seems like every time he mentions going somewhere, she has some excuse for not going.”
“The VIDEO!!!” someone yelled, breaking the silence. Then everyone started laughing.
Offended by their making fun of me, I asked, “What’s so funny? My French is not that good, so I just didn’t understand. What did you think I was talking about?”
Everyone pointed to the door where the student was speaking to the administrator, both unaware of what was happening in the classroom. I was so embarrassed!! Then one of the students said, “Well, I guess we got a real-life example of a faux pax sooner than we expected!”’