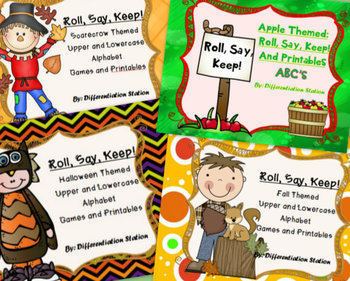 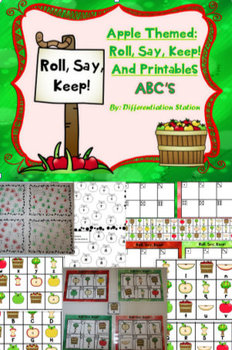 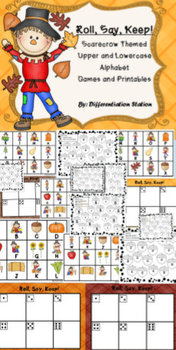 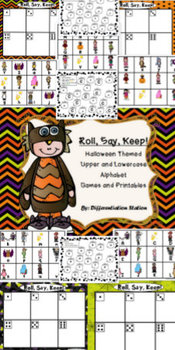 10,167 Followers
Follow
More products from Differentiation Station Creations
$34.00
Digital Download
List Price:
$44.00
You Save:
$10.00
Report this resource to TpT
Bundle! This is a bundle of all of the fall and winter themed "Roll, Say, Keep" alphabet centers, games, and printables. I will continue adding to this bundle throughout the year. If you buy now, you will be saving a bundle! This bundle is $32 right now, but will increase in price as I add more games. Right now you buy 15, get 4 free!

These games can be used in a center or small group setting. It is appropriate for advanced preschoolers, kindergarten, special education instruction, or for any student that needs extra practice in learning their upper and lowercase letters. There is a lot of repetition to help students strengthen their knowledge of the upper and lowercase letters of the alphabet. You can also use these games to work on the sounds for each letter of the alphabet.

Common Core Standards:
CCSS.ELA-Literacy.RF.K.1d Recognize and name all upper- and lowercase letters of the alphabet.
CCSS.Math.Content.K.CC.B.4a When counting objects, say the number names in the standard order, pairing each object with one and only one number name and each number name with one and only one object.
CCSS.ELA-Literacy.RF.K.3a Demonstrate basic knowledge of one-to-one letter-sound correspondences by producing the primary sound or many of the most frequent sounds for each consonant.

**Please leave feedback for my product.** You earn credits for the feedback you leave on purchased resources! I am thrilled to receive your feedback, suggestions, and requests. I look forward to working with you!