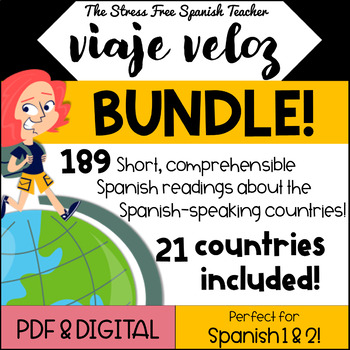 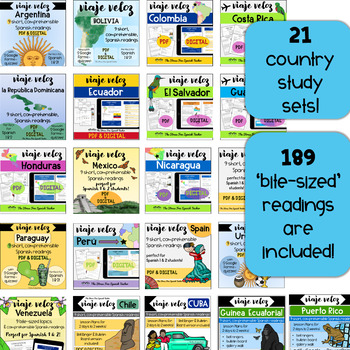 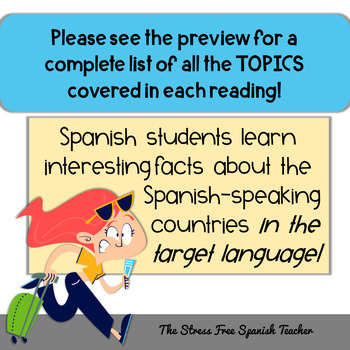 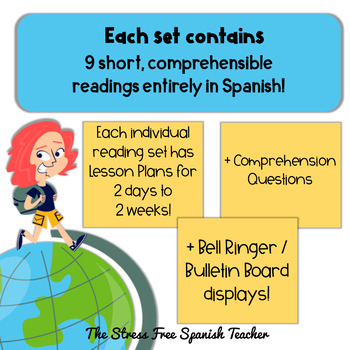 Take the stress out of planning and pique your students’ interest in each Spanish-speaking country! Perfect for end of year Spanish 1, Spanish 2 & above!

What is a growing bundle?

21 Viaje Veloz sets are finished and included in this bundle. 9 readings per set = 189 readings! Even more is coming soon! There are scheduled updates for ALL sets, bringing you even MORE RESOURCES! (Please see the free preview with the spreadsheet!)

⭐️Purchasing now means you get t all future updates at no additional cost! Just return to your “My Purchases” as new resources are added to the bundle and access your additional resources and any other updates that have taken place!

➤➤Please download the preview to see a chart of everything included, scheduled updates, and each Spanish-speaking country’s lectura topics.

Teachers who have used the Viaje Veloz series have said:

“I loved this resource! My students know how much I love Spain! This is a great way for them to learn things about Spain IN the target language! They were able to acquire new vocabulary AND confidence!”Viaje Veloz España</a>

“Love when students can read in the target language and learn more about the countries where Spanish is spoken! These Viaje Veloz stories are FANTASTIC!!” Viaje Veloz Argentina

The following resources are included in this GROWING BUNDLE!. Those not yet included are scheduled to be added soon (see individual dates).

The purchaser of this resource is granted a single license for one teacher to use this resource for personal, classroom use only. Licenses are non transferable and cannot be shared or passed on to another teacher. This set of resources is not meant to be shared within departments or with school districts. If additional teachers would like to use these resources, additional licenses can be purchased at a deep discount for each additional teacher who intends to use these resources.

Already purchased SOME sets in the bundle, but still want a discount on the ones you’re missing? NO PROBLEM!

➤You can BUILD YOUR OWN BUNDLE with just the sets you need / want with a 25% discount! Learn how here!

➤You can ask TpT for a refund for the sets you've already purchased & BUY THIS GROWING BUNDLE!➤➤➤ TpT will give refunds on qualifying purchases made within the past year.