Barnum's Bones Plus with Waterhouse Hawkins, Biography Units for ARCHAEOLOGISTS! 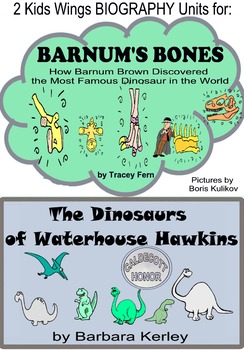 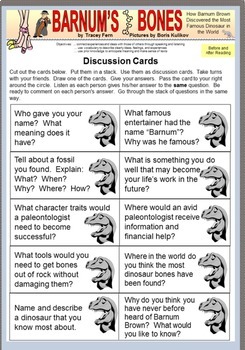 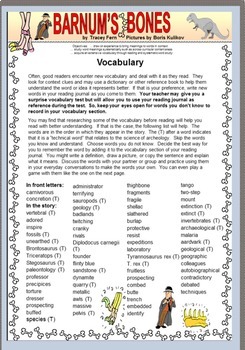 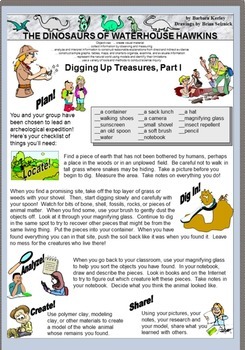 BARNUM'S BONES, HOW BARNUM BROWN DISCOVERED THE MOST FAMOUS DINOSAUR IN THE WORLD, AND

THE DINOSAURS OF WATERHOUSE HAWKINS

will have your kids digging in together to learn about REAL SCIENTISTS who spent their lives looking for dinosaurs and sharing what they learned!

They say that if you do what you love, you'll never work a day in your life. That worked for Barnum Brown who had always loved to dig and look for treasures in the soil. He decided he wanted to do it for his life's work ... so he went to college to learn and then became one of the most important American paleontologists of all times. He spent his life looking for the bones of new species of dinosaurs.

He found them! Tons and tons of ancient bones! He found them buried in sandstone in South Dakota. He found them in India. He found them by diving in the Gulf of Mexico! In Canada, he hunted for them from a raft. But, in Hell's Creek, Montana, he found his "favorite child," a dinosaur that had been sleeping for more than sixty-six million year after dinosaurs became extinct. It became the most famous dinosaur in the world. What was this dinosaur that Barnum Brown discovered in Montana? Where can you see it today? How did find it? How big was it? Did anything scary ever happen to him? (Hint: YES!)

This scientist was the personification of the American spirit. He had high ideals, he worked hard in spite of often difficult circumstances, and his perseverance, creativity, and desire to find better techniques were never ending. Tracey Fern has written Barnum Brown's biography in Barnum's Bones! A terrific artist named Boris Kulikov illustrated it. And NOW, it's in your library! (if you're lucky)

BARNUM'S BONES, HOW BARNUM BROWN DISCOVERED THE MOST FAMOUS DINOSAUR IN THE WORLD will become one of your favorite picture book biographies! Kids Wings had created the perfect classroom study to go with it. Our activities will inspire problem solving and innovation, work ethic, creativity, and admiration of character traits that represent the best in the American Dream. It will be a classroom favorite, so Kids Wings recommends you consider purchasing a class set. The Kids Wings unit and 50-slide Jeopardy-type game will delight every teacher and guarantee thoughtful, fun, social and exciting academic growth for every classroom. In addition, we have included our literature guide for The Dinosaurs of Waterhouse Hawkins to create a pair of stories to compare and contrast.

The Kids Wings activities in BARNUM'S BONES, HOW BARNUM BROWN DISCOVERED THE MOST FAMOUS DINOSAUR IN THE WORLD were written by Suzy Red and come to you in PowerPoint and PDF formats to make projecting and printing easy and fun. The 29 activities include:

Mapping: Where in the USA are Montana and New York?

Vocabulary Game: Five in a Row!

Sequence and Summary of Letters

Sizing Up Time and Weight, Math

Researching a Dinosaur: Which is YOUR Favorite Child?

Connecting Barnum’s Bones and The Dinosaurs of Waterhouse Hawkins

Plus, a BONUS Interactive Jeopardy-type Game

Who was the first person to create life-sized models of dinosaurs? How did he grow from drawing fossils to creating the giants?

Brian Selznik’s illustrations help you see what people had never seen before!

The Kids Wings activities for THE DINOSAURS OF WATERHOUSE HAWKINS were written by Suzy Red and come to you in both PowerPoint and PDF formats for easy projection and clear, fast printing! The activities include:

The Ballad of Waterhouse Hawkins

PLEASE NOTE: Kids Wings materials are written by highly experienced master teachers. We hire professional proof readers who are also master educators. We do our best to be sure each of our literature guides is top quality and error free, and classroom tested, but if you think we can do better, we welcome your input. If you find an error in our materials, please email us at suzy@suzyred.com so we can make corrections. After it is corrected, we will invite you to download a newly polished copy and will probably attach a surprise to our reply as a thank-you!

If you like our materials, we would be very grateful if you let us and others know!