Battle of the Vowels 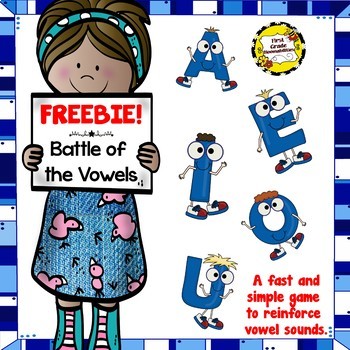 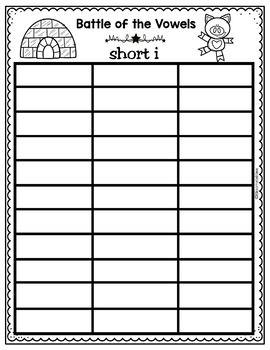 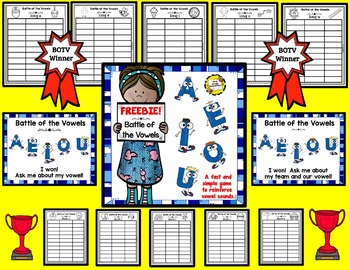 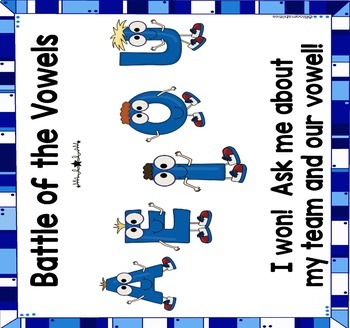 I wanted a different activity to reinforce long and short vowel sounds that would be QUICK and FUN! It was impromptu and I just used plain paper. That’s honestly all you need. Truly! However, I made up these recording sheets just to make it easier/neater for the kids. Having two pictures up top helped reinforce the beginning/middle vowel sound the second time we played.

1.Divide students into equal groups that have a good mixture of abilities.

3.I assigned a student to record answers but explained that EVERYONE

4. Set timer to see which group or individual can get the most words in

You can run 2-sided if you want depending on your students. Sometimes I run them short vowel on front with the matching long on back.

Comes with two certificates for individual and group win.

Think of all the variations you can do with this simple game!

I loved walking around listening in on the conversations going on and was surprised how much info I walked away with on many of the children. Some good news, some not so great news!

Observations that made me smile: A child saying it was okay to write EIGHT

“eight” on their long a sheet because they were assigned the long a sound even though it was an oddball and started with an “e.” Child went on to say

“the English language can be so tricky at times. (HA!) Another group wrote FOE down on their long o paper thanks to a poem we had read minutes before. From that same conversation, the short e group wrote down “nemesis” which impressed me!

I was surprised at a group of kids that, I would have thought, would have been to easily get to 20 words or so within minutes. NOPE! NINE WORDS for short a. Shocked no one suggested word families! So that was a lesson for ME! Back to reinforcing how mush word families help us in a variety of ways!

Bundled Short Vowels Read the Room and I Have, Who Has Activities

Bundled Long Vowels Read the Room and I Have, Who Has Activities

Long and Short Vowels Bundled Read the Room and I Have, Who Has Activities

Have you been frustrated with your I Have, Who Has? Games when they're in progress because kids can't hear each other or it's unclear what the word being asked for is? Don't give up! Read my blog post on how I FINALLY got my class to successfully play the game 100% of the time:

My Love, Hate, now LOVE Relationship with I Have, Who Has? Games

Total Pages
12 Student
Answer Key
N/A
Teaching Duration
30 minutes
Report this Resource to TpT
Reported resources will be reviewed by our team. Report this resource to let us know if this resource violates TpT’s content guidelines.

Log in
to see state-specific standards (only available in the US).
CCSSRF.2.3c
Decode regularly spelled two-syllable words with long vowels.
CCSSRF.2.3b
Know spelling-sound correspondences for additional common vowel teams.
CCSSRF.2.3a
Distinguish long and short vowels when reading regularly spelled one-syllable words.
CCSSRF.2.3
Know and apply grade-level phonics and word analysis skills in decoding words.
CCSSRF.1.3d
Use knowledge that every syllable must have a vowel sound to determine the number of syllables in a printed word.