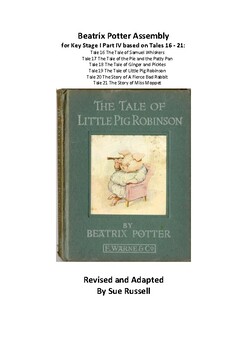 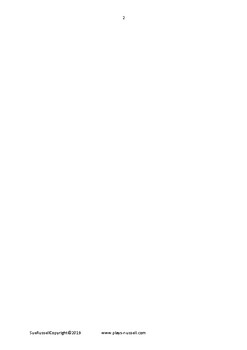 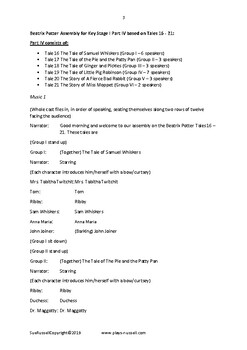 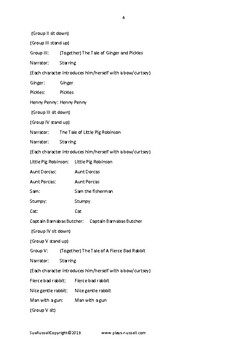 This is the fourth of a set of four – Parts I, II and III cover five tales each, and Part IV covers six. Thus, twenty-one in total. (For complete listing, scroll down to bottom of page).

Cast of 24 (easily adapted up or down) and duration of around 10 minutes – this is reading time so performance can take it beyond this with possibility of further additions.

Tale 16 The Tale of Samuel Whiskers

Tale 17 The Tale of the Pie and the Patty Pan

Tale 18 The Tale of Ginger and Pickles

Tale 20 The Story of A Fierce Bad Rabbit

Tale 21 The Story of Miss Moppet

The character, Ribby, does appear twice – she appears in The Tale of Samuel Whiskers and the Tale of the Pie and the Patty Pan; but for the sake of keeping the cast total at 24, she can be played by two different children.

Ribby (Cousin and neighbour to Tabitha)

Narrator: And so to The Tale of Samuel Whiskers. (Pauses) Goodness, is this one about

Samuel Whiskers: (Interrupting) Me! A rat!

Narrator: I have to say I am just a little surprised that it is your name in the title.

Ribby: A rat that nearly made a dumpling

John Joiner: That will teach you to misbehave!

Narrator: Oh, I like this tale – about a pie and a patty pan! And a dinner party that went badly wrong (pauses) we’ve all been to one of those!

Dr. Maggotty: But this one takes some beating!

Narrator: I have to agree. I mean, let’s start with the fact it was a cat inviting a dog to dinner!

Ribby: I was the hostess, Ribby!

Duchess: And I the guest, Duchess!

Dr. Maggotty: And I was the doctor

Narrator: What a name! I’m not sure I’d call on your services if I were ill!

Narrator: Oh dear! This is not such a happy tale!

Ginger: We lost everything!

Henny Penny: And whose silly fault was that?

Narrator: (Gasping) Oh surely we should show these two shop-keepers some sympathy? It’s not every day your business goes under.

Henny Penny: But it was their fault! They gave everything away!

Little Pig Robinson: Yes, it does!

Narrator: Aha! The Owl and the Pussycat, right?

Aunt Dorcas: But that’s not what this tale is about.

Narrator: Ah! You two aunts! I can tell how proud of him you were!

Sam: He was a very brave little pig.

Stumpy: To go all the way to market by himself

Narrator: A shame he fell in with such bad company at the end of the day.

Captain Barnabas: You mean me and my crew?

Cat: Well, you did want to turn him into roast pork!

(Both aunts shriek in fright)

Man with a gun

Man with a gun: (Pointing his gun at fierce bad rabbit) So, it’s action you want, is it?

Narrator: (Intervening quickly) We’ll have none of that kind of action, thank you very much!

Man with a gun: But that’s what happened in the tale!

Fierce bad rabbit: I lost my tail and whiskers!

Narrator: You did steal his carrot!

Nice gentle rabbit: And scratched me!

Narrator: A cat and mouse! How can this possibly end well?

Miss Moppet: We get on just fine!

Around 10 minutes reading time but this can of course be expanded, to allow more performance.

The lines/text is simple and short as appropriate for Key Stage I. If the teacher, who takes the role of narrator throughout all 21 tales (all 4 parts), wishes to release some of his/her lines to the more able/more confident in the class and add further text from the tales, then that is, of course, down to the teacher in charge. The idea of these scripts is to provide a template that can be edited according to the ability of the children.

Also available from www.plays-r-ussell.com are a set of guided reading scripts, written using the same format – 5 tales for Parts I, II and III, with 6 in Part IV; around 6 speakers per tale – the total number adding up to 30, each tale around 5 minutes in duration (not including Q&A/Discussion based around PSHE themes).

Choice of Music at the beginning:

· Music 1 – All things Bright and Beautiful

Or another ‘animal-based song’.

Part I consists of:

· Tale 1 The Tale of Peter Rabbit

· Tale 2 The Tale of Squirrel Nutkin

· Tale 3 The Tailor of Gloucester

· Tale 4 The Tale of Benjamin Bunny

Part II consists of the following:

· Tale 6 The Tale of Mrs. Tiggy-Winkle

· Tale 8 The Tale of Tom Kitten

· Tale 9 The Tale of Jemima Puddle-Duck

· Tale 10 The Tale of the Flopsy Bunnies

· Tale 11 The Tale of Mrs. Tittlemouse

· Tale 12 The Tale of Timmy Tiptoes

· Tale 13 The Tale of Johnny Town-Mouse

· Tale 15 The Tale of Pigling Bland

Part IV has the following tales:

· Tale 16 The Tale of Samuel Whiskers

· Tale 17 The Tale of the Pie and the Patty Pan

· Tale 18 The Tale of Ginger and Pickles

· Tale 20 The Story of A Fierce Bad Rabbit

· Tale 21 The Story of Miss Moppet