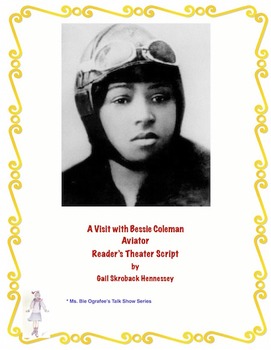 Use this informative Reader's Theater Script to learn about Bessie Coleman. Bessie was the first African American female pilot in the U.S. A. AND the first AMERICAN to receive an international pilot's license! Great for Black History Month in February or Women's History Month in March. Comprehension questions/extension activities, key. Part of my Ms. Bie Ografee Talk Show Series.

I also have these resources you may find of interest:

1. The idea to foster contributions of African Americans began with Dr. Carter G. Woodson, back in 1926. Love his motto to live by-"It is never too late to learn!" Check out my web quest for Black History Month.Twelve fact packed questions/Did You know facts and more: Black History Month, A Webquest

4. Use this informative Reader's Theater Script to learn about Harriet Tubman, ex-slave who became the most famous conductor of the Underground Railroad, a Union Spy and women's suffrage advocate. The fun/informative play uses the format of Harriet Tubman being a guest on Ms. Bie Ografee's talk show and the studio audience asks questions about her life and contributions. Great for Black History Month,unit on the Civil War,or Women's History Month. Comprehension questions/extension activities, key. Harriet Tubman, A Reader's Theater Script

6. Learn about Rosa Parks with this Reader's Theater Script. Rosa Parks is a guest on a talk show and the studio audience asks questions about her life and contributions and how her bus ride helped to change history! There are 8 questioners, a Did You Know? fun fact section, comprehension questions, a teacher page with extension activities, the key and additional links. Rosa Parks, A Reader's Theater Script

7. Learn about the Tuskegee Airmen with this informative play. Comprehension questions, a Did you Know? section, a Teacher Page with links, extension activities and a key are also included.Part of Ms. Bie Ografee's Talk Show Series.Tuskegee Airmen, A Reader's Theater Script

8. Use this informative Reader's Theater Script to learn about Marian Anderson, one of the most important singers of the 20th century. Anderson also played an important role in overcoming prejudice toward African American artists. In 1955, she was the first African American to sing at the New York Metropolitan Opera. www.teacherspayte... Women's History Month/Black History Month or any time of the year! Marian Anderson, A Reader's Theater Script

9. Need a quick fun Friday(or day before a vacation activity)? Try this fun and information play based on the Mark Goodson Production To Tell the Truth Game Show. Students in grades 4-9 will have fun acting out their parts and learning some interesting facts about Amelia Earhart. Comprehension questions, discussion questions and extension activities and links are also listed. The biographical play addresses several common core standards in social studies, speech and listening and language arts. Amelia Earhart, A Reader's Theater Script

11.Martin Luther King Jr. A Biographical Play: Learn about this important civil rights leader who worked for equality in non-violent ways. Martin Luther King envisioned a world where the color of your skin did not determine a person’s value and civil rights! He was also a excellent orator whose " I Have a Dream Speech" is probably his most famous. Using this Reader's Theater Script, part of my Ms. Bie Ografee Talk Show series of plays, your students will have fun acting out the parts and learning about the life of Martin Luther King, as they pretend to be in the audience of Ms. Bie Ografee's Talk Show. There are 10 audience informational questioners, a Did You Know? section of additional facts, comprehension questions, a teacher page with extension questions, vocabulary(which are highlighted in the play), additional links and the key. Martin Luther King: A Reader's Theater Script

12. Part of my Ms. Bie Ografee Talk Show Series: Students learn about George Washington Carve,the Wizard of Tuskegee, with this informative Reader's Theater Script. As a guest on Ms. Bie Ografee's Talk Show, Carver answers questions from the studio audience about his life. Carver found more than 300 uses for the peanut. He also found about 118 products that could be made from the sweet potato. For his many discoveries, Carver is also called the “Black Leonardo”(after Leonardo da Vinci). He was an early believer in recycling and believed in the importance of respecting nature.George Washington Carver: A Reader's Theater Script

13. Aida de Acosta did something really amazing in 1903. She became the very first woman to fly a powered aircraft all by herself. In fact, Aida, piloted the dirigible six months before the Wright Brothers would make their historic flight. Even more amazing, she kept what she had done a secret for almost thirty years!

The reading passage includes Did You Know? fun facts, comprehension questions and a teacher page with extension activities.

Great for Women's History Month, during a unit on aviation or as a Friday activity.

COULD YOU KEEP SUCH AN AMAZING SECRET FOR 29 YEARS?Aida de Acosta

Please consider following me by click by the green star on the upper right hand side of the page. Thank you.

Total Pages
6 pages
Answer Key
Included
Teaching Duration
40 minutes
Report this Resource to TpT
Reported resources will be reviewed by our team. Report this resource to let us know if this resource violates TpT’s content guidelines.