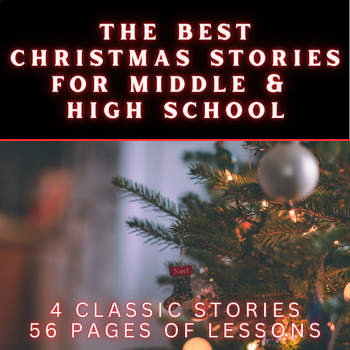 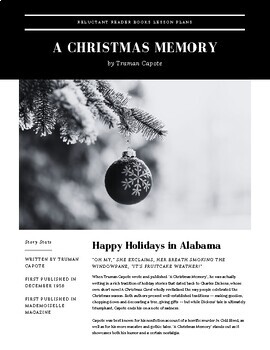 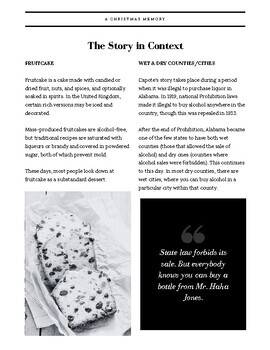 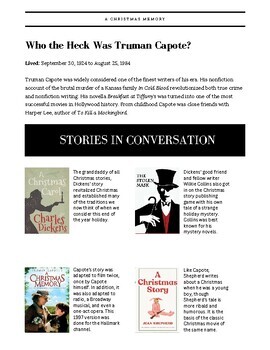 In conjunction with our free PDF of the Best Christmas Stories for Middle & High School (found on our website), we have created a complete set of lesson plans for all six stories.

Lesson plans are for the following stories:

Stories are not included in lesson plans but can be found for free on our website.

Our lesson plans are divided into the following sections:

Each of our lesson plans begins with a short intro page giving a brief review of the story and its publication history: when it was first published and where.

Brief background is provided for certain concepts that students may be unfamiliar with. Enough to encourage class discussion, but not enough to be distracting to the story itself.

In these lessons, we examine facts about the North Pole, explain the nature of fruitcake and mock turtle soup, ask just who was the Grinch, and discuss just why anyone would buy human hair in the first place.

Stories do not exist in a vacuum. Our lesson plans try to connect the dots between the story itself and other stories, movies, and media that came before and after.

In these lessons we make connections between a wide range of Christmas stories like A Christmas Carol, The Night Before Christmas, Christmas on Sesame Street, as well as movies like The Santa Clause. But we also see how these writers connect with authors like Mark Twain, Ernest Hemingway, the authors of the Bible, and even JRR Tolkien.

Interrogating Characters presents students with a way to engage with specific characters in the story. We select characters other than the main character or narrator so that students can ponder other points of view.

In these lessons we interrogate Max the Dog, a Yukon gold miner, a Prohibition bootlegger, and a magical train conductor who takes kids to the North Pole.

Every story has gaps or missing points of view. In Missing in Action, we ask students to consider those neglected viewpoints in order to gain a better understanding of what the author has left out.

In these lessons we ask questions about the parents of Klondike gold hunters, friends who claim Santa Claus isn't real, a woman who buys and sells hair, a jury who finds a murderer innocent, and even Santa Claus himself.

Analyzing Language provides 6 questions that look specifically at the language the author has used and asks students to consider those choices to better understand the story.

Each lesson plan has one Activity. Some are solo projects, others are done with partners or in groups. Activities engage students with the text in ways that are analytical but not based on essay responses.

In these lessons we craft maps to the North Pole, make lists of our more prized possessions to sacrifice at Christmas, create the perfect holiday feast menu, and play humbug to examine Christmas traditions we don't really care for.

In these lessons we imagine a young man explaining why he gave away his grandfather's pocket watch, pen the Who's Christmas Song, ponder a millionaire miner who finally catches up to the thieves who stole his dog team, and wonder about the final destination of a murderer's haunted luggage.

Lessons for all six stories are included in their entirety.