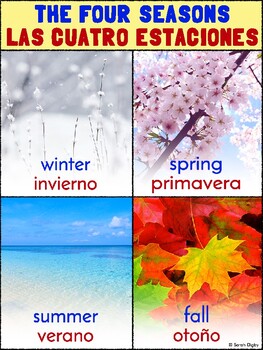 Bilingual poster of the four seasons in Spanish and English – perfect for any early bilingual, dual-language, or language-learning classroom! Real pictures also make the poster ideal for older ELLs/emergent bilinguals.

• Bilingual Months of the Year Poster »

• Bilingual Days of the Week Poster »