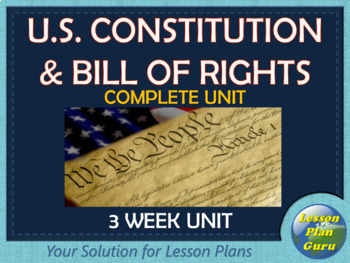 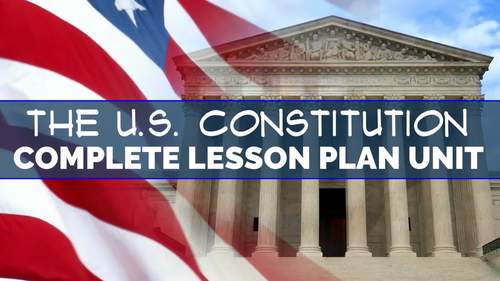 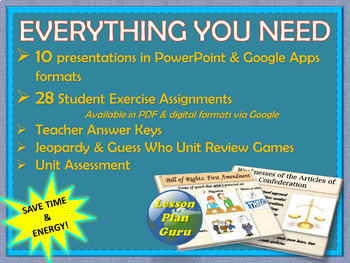 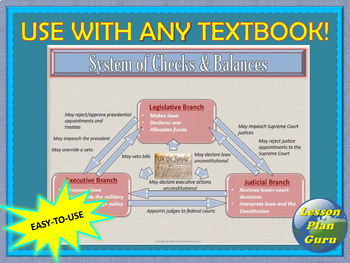 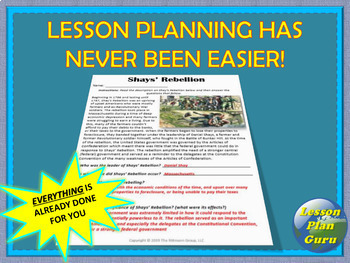 The unit is designed to last 14 classroom periods, but can EASILY be stretched out for several more! The Bill of Rights and US Constitution comes with TEN sets of lesson plans, each with its own PowerPoint presentation, student exercises, and teacher answer key. Unit review activities including a Jeopardy review game and exercises are also included, along with a unit exam that comes complete with teacher answer key.

ALL of the resources in this unit have been used with students across several grades, primarily 5th, 6th, 7th, and 8th with much success and may also be used for 9th and 10th grades as well!

You’ll receive everything you need to cover these topics:

--Weaknesses of the Articles of Confederation

--Reasons to replace the Articles of Confederation

--Goals of the Constitutional Convention

--Replacing the Articles of Confederation

--Opposition to the Virginia Plan

Preamble of the Constitution

--Importance of the Preamble to the U.S. Constitution

--Meaning of "We the People"

--Translation of the Preamble text into easy-to-understand terminology

Ratification of the Constitution

--Process of ratifying the Constitution

--Sequential order of ratification by state, from first to last

--Opposition to the Constitution

--Breakdown of each of the Bill of Rights 10 Amendments

--Articles I, II, and III of the Constitution (Legislative Branch, Executive Branch, and Judicial Branches of the government)

--System of checks and balances

--Responsibilities of each branch of government

--Responsibilities of each level of government

--The important role he played in the Constitutions creation

--"Father of the Constitution"

--His important contributions towards the creation of the Constitution

--Writing the Bill of Rights

Other Significant Individuals of the Constitution

--Importance and meaning of Constitution Day

->12 categories with ALL questions and answers

I greatly appreciate ANY feedback and I’m adding new products to my TPT store all of the time! Receive updates when new products become available -and- receive exclusive notice of any sales I throw! Click HERE to follow me!

If you have any questions about this product, PLEASE don’t hesitate to reach out to me directly at jillian.tpt@gmail.com

Total Pages
206 PPT slides
Answer Key
Included with rubric
Teaching Duration
3 Weeks
Report this Resource to TpT
Reported resources will be reviewed by our team. Report this resource to let us know if this resource violates TpT’s content guidelines.