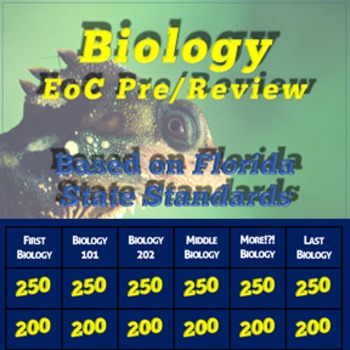 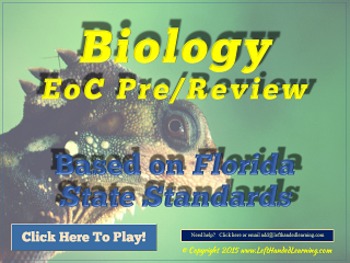 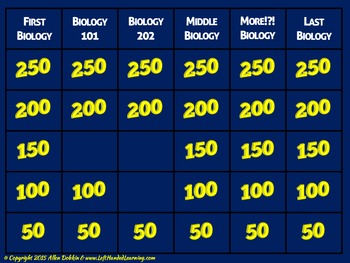 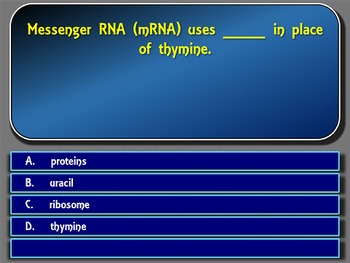 (6 MB|200 pages)
Product Description
NEWLY UPDATED for 2015-16! Biology End Of Course Exam Review - Unlimited play! - Over 100 questions multiple choice and short answer style in a dynamic Power Point set up that provides endless replay value. Students will never know what is coming next! Multiple choices are mixed up for every play. No Prep - just plug and play. POWER POINT IS NOT REQUIRED - if you don't have Power Point installed, this package will get you the free player so you can use it. I do think it is for windows computers only.

By the way - you should really join my mailing list as my subscribers all get great deals and freebies. You get a free gift by email the moment you subscribe. Click here to join.

In my classes, I use this style of game to review for tests, to fill those slow times, and to find ways to reward the class and get them to work together.

Some variants I use to spice up the games and keep it fresh and exciting:

• All the students vs. the teacher. They have to get enough points as a team to win whatever prize (free time, no homework, etc.) BUT they lose 50 points every time someone calls out of turn! This is such a useful tool for classroom management. Want a positive twist? Instead of penalizing the impulsive kids, give bonus points to all the teams that don't call out - or only to the fewest caller-outers. =)

• Odds vs. Evens - Just go up and down every row alternating which team gets the points.

• Evil Mode - Get out a piece of paper; no talking; write down your answers and it counts for a grade! Muwahahaha!

• Teach the technology - I mentor one or two students to run the game, then they mentor one or two. By the end of the year, all the students have learned how to use it well and some have even picked up VBA programming as a result. This really makes it easy for accreditation from SACS and AISF as they are always looking for evidence of how we are preparing students for our technology saturated world. Sometimes I can even grade papers while the class is running itself!

I am committed to your satisfaction - I have and will make changes and additions (often within 24 hours) based on feedback from you. Please let me know what I can do to make your teaching life easier!

• Please go to your My Purchases page (you may need to login). Beside each purchase you'll see a Provide Feedback button. Simply click it and you will be taken to a page where you can give a quick rating and leave a short comment for the product. Each time you give feedback, TPT gives you feedback credits that you use to lower the cost of your future purchases. I value your feedback greatly as it helps me determine which products are most valuable for your classroom so I can create more for you.