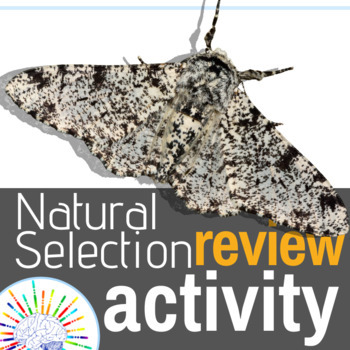 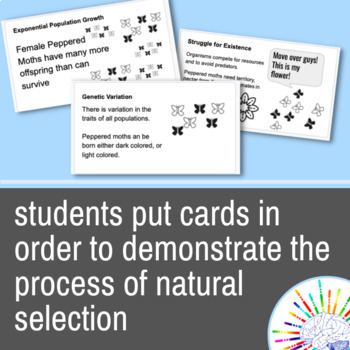 This Biology EOC Review activity will only take a few minutes, but strongly reinforces the key concepts involved in natural selection, including:

- The potential for exponential population growth

- Genetic variation within a population

- Inheritance - surviving organisms pass their favorable adaptation to their offspring

The resource centers around the famous example of Natural Selection - the Peppered Moth. There is a set of seven cards describing each step of Peppered Moth evolution during the Industrial Revolution. Students are given the cards in the proper order, and use them as a guide to put two additional sets of cards in the right order - one about the evolution of Rock Pocket Mice, and one about the evolution of Antibiotic Resistant Bacteria.

- Seven example cards about the evolution of the Peppered Moth

Check out these three other Biology activities!

Total Pages
8 pages
Answer Key
Included
Teaching Duration
30 minutes
Report this Resource to TpT
Reported resources will be reviewed by our team. Report this resource to let us know if this resource violates TpT’s content guidelines.

Log in
to see state-specific standards (only available in the US).
NGSSHS-LS4-4
Construct an explanation based on evidence for how natural selection leads to adaptation of populations. Emphasis is on using data to provide evidence for how specific biotic and abiotic differences in ecosystems (such as ranges of seasonal temperature, long-term climate change, acidity, light, geographic barriers, or evolution of other organisms) contribute to a change in gene frequency over time, leading to adaptation of populations.
NGSSHS-LS4-3
Apply concepts of statistics and probability to support explanations that organisms with an advantageous heritable trait tend to increase in proportion to organisms lacking this trait. Emphasis is on analyzing shifts in numerical distribution of traits and using these shifts as evidence to support explanations. Assessment is limited to basic statistical and graphical analysis. Assessment does not include allele frequency calculations.
NGSSHS-LS4-2
Construct an explanation based on evidence that the process of evolution primarily results from four factors: (1) the potential for a species to increase in number, (2) the heritable genetic variation of individuals in a species due to mutation and sexual reproduction, (3) competition for limited resources, and (4) the proliferation of those organisms that are better able to survive and reproduce in the environment. Emphasis is on using evidence to explain the influence each of the four factors has on number of organisms, behaviors, morphology, or physiology in terms of ability to compete for limited resources and subsequent survival of individuals and adaptation of species. Examples of evidence could include mathematical models such as simple distribution graphs and proportional reasoning. Assessment does not include other mechanisms of evolution, such as genetic drift, gene flow through migration, and co-evolution.