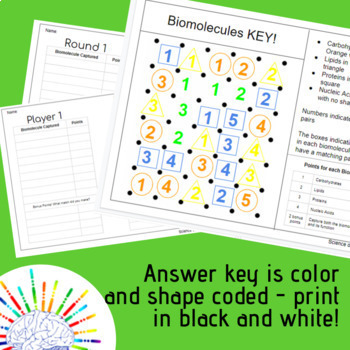 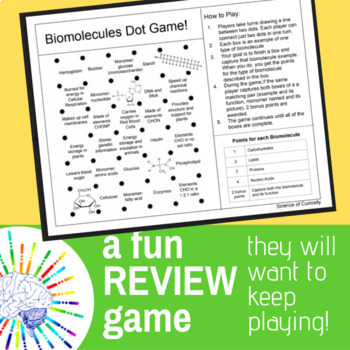 Science of Curiosity
1.5k Followers
Made for Google Drive™
This resource can be used by students on Google Drive or Google Classroom. To access this resource, you’ll need to allow TPT to add it to your Google Drive. See our FAQ and Privacy Policy for more information.

This is a super fun game for reviewing and reinforcing the Biomolecules! Carbohydrates, Lipids, Proteins and Nucleic Acids! Students use strategy and their knowledge of  Biomolecules to gain the most points and win the game.

Players take turns going back and forth, each connecting two dots with a line. If a player draws a line that completes a box, that player ‘captures’ the Biomolecule described inside the box. They get the points assigned to that Biomolecule (indicated on the game sheet). Typical game play for the ‘dot game’ allows a player to take a second turn after winning a box, but I tell students to always go back and forth (no double turns) to keep things more fair.

Included on the game board:

Students quickly learn that some Biomolecules hold more points than others, which keeps them focused and interacting with content as they consider each move!

Plus, most of the boxes have a matching box. If the same player captures both of a pair during the game, they get two bonus points! For example, one box says ‘phospholipid’ and another box is the function of phospholipids: 'making up cell membranes'. Other matches include the name each monomer and the picture of its structure.

There are two versions of the score sheet. One sheet is for just one round of play between two students - Player 1 and Player 2. The other score sheet is designed for two rounds of play, where each student has their own sheet, which they carry with them as they play against two different people.

An answer key and teacher's guide is included as well!

NOTE: Per the feedback from teacher ratings below, I have made and included a short Google Slide set that can be shown to students to teach them quickly how to play the game! No time wasted!

I usually set a timer, rather than letting them finish out the board. This adds a bit of ‘hurry’ to the game, students are more focused on gaining points as quickly as they can. Sometimes I offer candy or some other incentive to the top score or top 5 scores in the room for each round. My students love this game and ask to play it again and again!

Love dot games? Try this one!

Looking for more for Biomolecules?

Log in
to see state-specific standards (only available in the US).
NGSSHS-LS1-6
Construct and revise an explanation based on evidence for how carbon, hydrogen, and oxygen from sugar molecules may combine with other elements to form amino acids and/or other large carbon-based molecules. Emphasis is on using evidence from models and simulations to support explanations. Assessment does not include the details of the specific chemical reactions or identification of macromolecules.