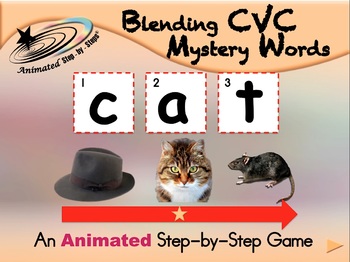 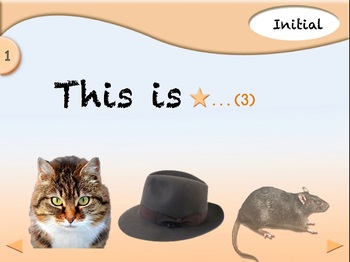 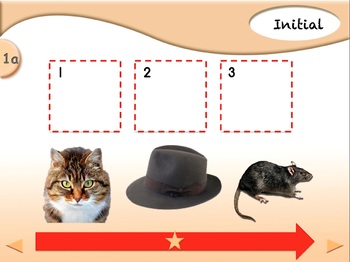 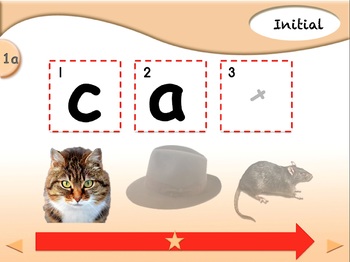 There is only one version of this literacy-focused activity that addresses the skill of blending sounds.

There are 7 sets of mystery CVC words representing changes in the initial, medial and final sounds.

A mystery target word (represented by three squares) is revealed. Touch each square in a right-to-left direction and the three sounds that make up the mystery word will be revealed.

A student is then invited to blend the three letters together and guess the ‘mystery word.’

If they select the correct photo, the blended mystery word will be heard; if incorrect they will hear a generic negation.

After identifying the correct word/photo, students are invited to touch the red arrow which will produce a series of animations that will reveal the letters corresponding to each of the three sound blocks, e.g., /k/ (letter c), /^/ (letter u), /t/ (letter t).

Please note all photos/images are ‘loaded’ with sound, i.e., touch the photo of the cat, and the word ‘cat’ will be heard.

This resource can be displayed on the 'big screen' (interactive whiteboard, large screen TV using Apple TV) or the 'small screen' (computer monitor, iPad/Android tablet using the free Microsoft PowerPoint app). Please visit the Animated Step-by-Steps blog for further information on the creative use of these educational resources. http://animatedstepbysteps.blogspot.com http://bit.ly/2g0uwsv