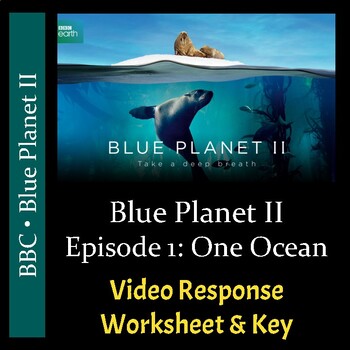 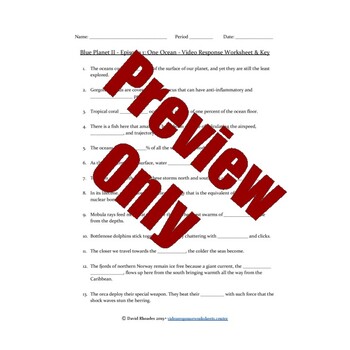 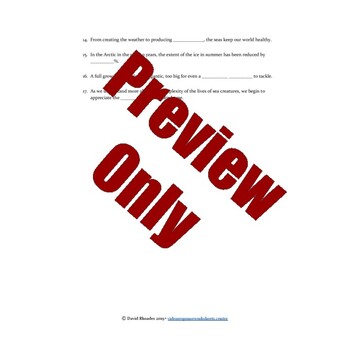 This Video Response Worksheet and Key is based on the BBC documentary series "Blue Planet II - Episode 1: One Ocean" as narrated by David Attenborough.

Video Response Worksheets will turn your history or science lesson into a rich educational experience that keeps students attentive, engaged, and accountable. The questions are designed so that they occur at a regular pace to keep the students engaged but not overloaded. They are also designed so that a review of the completed worksheet gives students a basic overall summary of the video.

Each episode is approximately 50-55 minutes long.

SERIES DESCRIPTION: Take a deep breath and embark on a magical, mind-blowing voyage into the most undiscovered place on our planet: the ocean.... Presented by Sir David Attenborough and scored by Academy Award-winner Hans Zimmer, Planet Earth: Blue Planet II takes viewers on a revelatory and magical journey into the mesmerizing world of our oceans — by turn tempestuous and serene, exquisitely beautiful and bleakly forbidding. They cover 70% of the Earth’s surface and hold 97% of all the water in the world. There is more life in the deep sea than anywhere else on Earth, and it is said we know more about the surface of Mars than the depths of our own planet. Our final frontier is the deep ocean – Earth's ‘inner space’.

IN THIS EPISODE: One Ocean takes us on a journey from the intense heat of the tropics to our planet's frozen poles to reveal new worlds and extraordinary never-before-seen animal behaviors.

BUY THE MULTI-EPISODE BUNDLE AND SAVE 33%. Individual episode worksheets are $0.75. Purchased separately, all seven cost $5.25. Buy the entire bundle for only $3.49.

Total Pages
2 pages
Answer Key
Included
Teaching Duration
50 minutes
Report this Resource to TpT
Reported resources will be reviewed by our team. Report this resource to let us know if this resource violates TpT’s content guidelines.