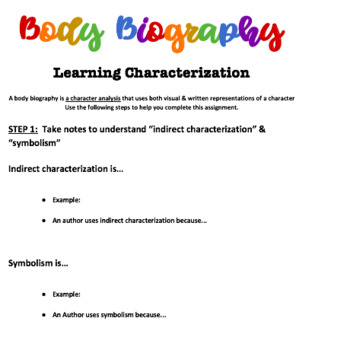 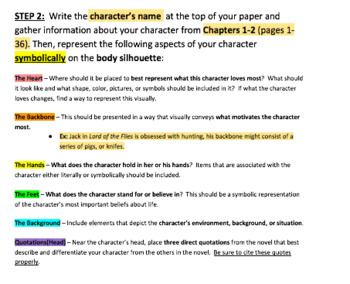 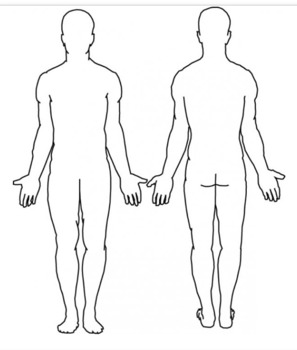 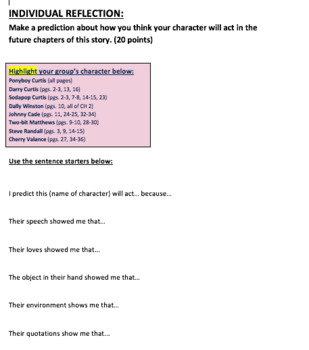 Students will assess characters in a story and better understand them by answering these prompts:

The Heart – Where should it be placed to best represent what this character loves most? What should it look like and what shape, color, pictures, or symbols should be included in it? If what the character loves changes, find a way to represent this visually.

The Backbone – This should be presented in a way that visually conveys what motivates the character most.
● Ex: Jack in Lord of the Flies is obsessed with hunting, his backbone might consist of a series of pigs, or knifes.

The Hands – What does the character hold in her or his hands? Items that are associated with the character either literally or symbolically should be included.

The Feet – What does the character stand for or believe in? This should be a symbolic representation of the character’s most important beliefs about life.

The Background – Include elements that depict the character’s environment, background, or situation.

Quotations(Head) – Near the character’s head, place three direct quotations from the novel that best describe and differentiate your character from the others in the novel. Be sure to cite these quotes properly.


There is a body outline for students to decorate, add TEXTUAL EVIDENCE, and write descriptive words.

Students will write a paragraph written reflection at the end, to fully describe the character not only with images and textual evidence, but also with a written description.

This can be done individually or as a group.
This may be repeated for every essential character in a story.


Log in to see state-specific standards (only available in the US).
CCSSCCRA.L.2
Demonstrate command of the conventions of standard English capitalization, punctuation, and spelling when writing.
CCSSCCRA.W.2
Write informative/explanatory texts to examine and convey complex ideas and information clearly and accurately through the effective selection, organization, and analysis of content.
CCSSCCRA.R.10
Read and comprehend complex literary and informational texts independently and proficiently.
CCSSRL.8.6
Analyze how differences in the points of view of the characters and the audience or reader (e.g., created through the use of dramatic irony) create such effects as suspense or humor.
CCSSRL.8.4
Determine the meaning of words and phrases as they are used in a text, including figurative and connotative meanings; analyze the impact of specific word choices on meaning and tone, including analogies or allusions to other texts.
Total Pages
5 pages
Answer Key
N/A
Teaching Duration
2 days
Report this Resource to TpT
Reported resources will be reviewed by our team. Report this resource to let us know if this resource violates TpT’s content guidelines.