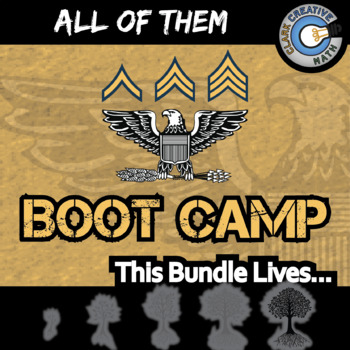 Products in this Bundle (44)

***THIS PRODUCT HAS BEEN UPDATED WITH A GOOGLE FORMS INTERACTIVE AND AUTOGRADING VERSION INCLUDED. REDOWNLOAD IF YOU HAVE IT ALREADY***

At times, I was frustrated teaching more challenging content when it was obvious many in the class needed extra help on easier stuff. I developed this idea of a Boot Camp to reinforce those skills, but allowing others to accelerate on their own!

Students will take a Pre-Assessment and will be assigned a level. Each level is thematically tied with a rank in the Army. So while the Levels of the problems get more challenging, they achieve a higher rank in the army.

After students master a level, they are signed off and promoted to the next level. Students intrinsically strive to get up a level and are innately curious about the next one.

In each Boot camp there are levels of problems, thus multiple practice assignments are included. For each level, 2 mastery tests are included. Over 200 problems included overall!

Buying the bundle will save 50% of what it would cost to buy them all separately!

Purchasing one license of this item grants one teacher the right to use the content.

This product includes a license for one teacher only for personal use in their classroom. Licenses are non-transferable, meaning they can not be passed from one teacher to another. No part of this resource is to be shared with a colleague or used by an entire grade level, school, or district without purchasing the proper number of licenses. If you are a coach, principal, or district interested in transferable licenses to accommodate yearly staff changes, please contact me for a quote at teach@clarkcreativeeducation.com

This resource or answers to the questions may not be uploaded to the internet where it is publicly available in any form including classroom/personal websites, network drives or student Prezis (can be made private), unless the website or app is password protected and can only be accessed by students.

Thank you for respecting my work!