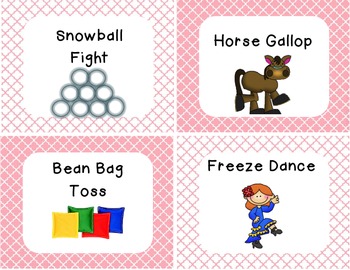 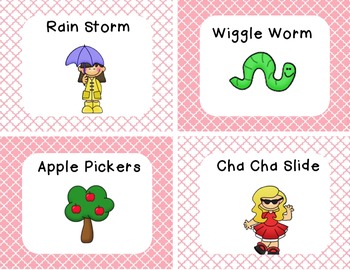 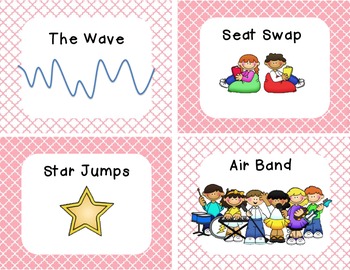 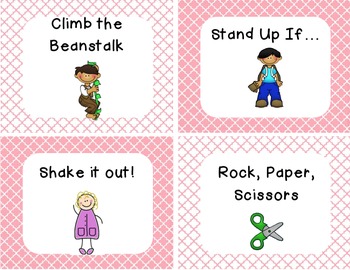 These are Brain Breaks Cards! They are activities that you can do with your class when they are too antsy or you're losing their attention. They usually only take a few minutes and they help the students refocus!

There are over 20 cards, and I included some blank ones so you can create your own!

Description of the activities on the cards:

Snowball Fight- you can do this pretend or with paper balls
Horse Gallop-they get to gallop around the room, pretending they are riding horses
Freeze Dance-you play music & they have to freeze when the music stops
Bean Bag Toss-everybody gets a partner & one bean bag. They stand facing each other & toss it to one another. If they catch it, they get to take one step back. The goal is to be on opposite sides of the carpet!
The Wave- just like at sporting events, they put their hands up in the air and send the wave down the line & back.
Seat Swap- They get to switch seats for a small portion of the day, or just a few minutes.
Star Jumps-They're a modified version of jumping jacks, so instead of them flapping all around, I have them jump, (look like a star with feet apart and hands to the side) hold it, and then jump back.
Air Band-They get to play the musical instrument of their choice in the air while listening to a song.
Rain Storm-Have the kids clap one finger against their hand, then two, then three, then four, then five. Start slowly & get faster. Then go from five to four to three to two to one. It will sound like a rain storm coming and going.
Wiggle Worm- The students roll their arms from the right hand, up the arm, to the shoulder, to the left shoulder, down the left arm, to the left hand. They get to pass the wiggle worm around the circle, taking turns.
Apple Pickers-They reach up with their left hand across their body to the right, pick an apple, and then touch the floor and put it in the bucket. Do the same with the right hand.
Cha Cha Slide- This is a popular line dance that tells the kids which steps to do.
Climb the Beanstalk-I have them pretend to climb the beanstalk, land in the clouds, walk around, open the door, see a giant, run back to the beanstalk, climb down the beanstalk, chop it down, and then sit down.
Stand up If...- You can fill in the blank. Stand up if you are wearing blue, if you love apples, you love Justin Bieber, etc.
Shake it out- I let them shake one body part at a time and say, "Shake it out of your legs, now your arms," etc.
Rock, Paper, Scissors- Instead of playing with their hands, I have them do it whole body. For rock, they crouch down, for scissors, they jump with their hands and feet apart, and for paper, they put their arms straight out in front of them like they're carrying a tray.
Butterfly-They sit almost criss-cross, but with the bottoms of their feet pressed together. They can put their elbows on their spread apart knees, and move their legs up and down to pretend like they're flying. I like to say, "If you were a butterfly, where would you fly?" and let a few of the kids answer.
Dance Video- I love the dance videos from Koo Koo Kanga Roo on Youtube!
Toe Touches-They just touch their toes, standing or sitting.
Jump Rope- Pretend like they're jumping rope. They can do fancy pretend moves, or have one student jump while two friends pretend to turn and have the class sing for them.
Hot Potato- Pass a ball around in a circle. I sometimes play music, and they have to stand up if they get caught with the ball. Or I time them to see how quickly we can pass it to everyone.
Sing a Silly Song- I love HarryKindergarten songs from Youtube!


If you have any questions about the cards or activities, feel free to email me: amberpaigeprince@gmail.com
Total Pages
8 pages
Answer Key
N/A
Teaching Duration
N/A
Report this Resource to TpT
Reported resources will be reviewed by our team. Report this resource to let us know if this resource violates TpT’s content guidelines.