Breakthrough: The Ideas That Changed the World - Episode 2: The Airplane 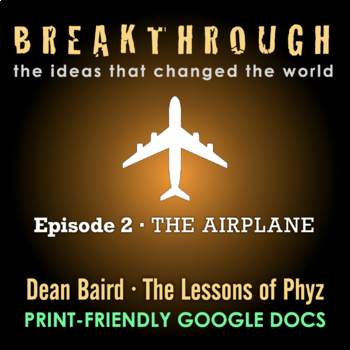 62 Followers
Follow
More products from The Lessons of Phyz
$2.99
Digital Download
Report this resource to TpT
Also included in

Breakthrough: The Ideas That Changed the World [TV-PG]

Episode 2 tells the story of the development of the airplane, from early human-powered attempts to the jet concepts of the future.

Experts Brandon Mikesell (Wingsuit Pilot), Shini Somara (Fluid Dynamicist), Tiera Fletcher (Aerospace Engineer), Ross Franquemont (U-2 Pilot), Dana Thomas (Operational Physiologist), and Richard Browning (Inventor) tell the story of how the airplane came to be and where it appears to be headed.

It involves a ninth-century moorish daredevil’s first attempt at human flight, how we had tails before we had wings, an artist obsessed with anatomy and flight, a whirling arm in the stairwell of a seaside mansion, the rubber band’s role in flight, the curve of a stork's wing, a connection to maritime technology and the gyroscope, the use of a deep-sea diving suit to fly high, why modern pilots are pressure tested, and the surprising efficiency of the jet propulsion gas turbine.

INTERVIEW: ‘Breakthrough’ looks at the ideas that changed the world {Hollywood Soapbox]

This set includes 32 questions that students can answer during a single, uninterrupted viewing of the episode.

April 2020 UPDATE: In addition to the printable PDFs of the student blank and answer key, a Google Docs version of the student document now included for easier distance learning use.